HONG KONG • Gambling revenue in Macau rose 14 per cent last year, the second consecutive year of gain as demand to wager in the Chinese territory continued to rebound from a prolonged slump.

December was also the 29th straight month in which revenue in China's only legal gambling hub rose, versus the same month a year prior, according to data released yesterday by the Gaming Inspection and Coordination bureau.

Revenue for the full year was 302.85 billion patacas. It has stabilised since a period of decline, which coincided with a central government drive against conspicuous spending among public officials.

However, a China-US trade war and slowing Chinese economy will likely weigh on sentiment in the high-roller VIP segment, keeping further revenue gains in check, analysts said. Also, licences in the world's largest gambling hub start to expire next year, which would force all players to pitch for a spot on the casino floor. With frayed trade relations dealing American giants Sands China, Wynn Macau and MGM China a weaker hand, home-grown names could try their luck.

For the Macanese government, this is a chance to push for change. Officials could shake up a strip highly concentrated in American hands, and may even allow an extra, seventh operator.

Today, three United States-owned names control more than 60 per cent of industry ebitda (earnings before interest, taxes, depreciation, and amortisation), according to JPMorgan. Galaxy Entertainment, Melco and SJM Holdings, set up in Macau, account for the rest. 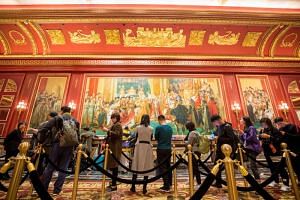 Licences for Macau casino operators SJM Holdings and MGM China are set to expire in 2020, while contracts for the remaining four operators Galaxy Entertainment, Melco International, Sands China and Wynn Macau will end in 2022. The licences were first awarded in a complex process in the early 2000s. Government officials have said there may be a new public bidding process when they expire.

Nevertheless, casinos are bullish on the potential benefits from the opening last year of the longest sea-crossing bridge and tunnel linking Macau to Hong Kong and mainland China's Pearl River Delta.

Meanwhile, entrepreneurs in Asia's own Las Vegas are readying their bets. Suncity controls about half of all VIP gaming in the territory through its junket business, which organises glitzy escapades. It is expanding into casinos overseas and Mr Andrew Lo, executive director of its Hong Kong-listed unit, says the company would pursue a licence in Macau if given the chance.

Other home-grown aspirants include Golden Dragon and Macau Legend. The former owns "satellite" casinos, which strike deals with permit-holders to set up shop.

The authorities also hope the bridge will boost the development of Macau's convention and exhibition business and raise overnight visitation numbers, both of which help drive non-gaming revenue.

The special administrative region has been encouraging casino operators to diversify to help broaden its economic base. At present, tax from casinos accounts for over 80 per cent of the Macau government's total revenue.