SYDNEY (BLOOMBERG) - China's luxury shoppers may be shunning pricey autos, but they're still finding an appetite for handbags and champagne as the trade war plays out unevenly across the country's high-end retailing landscape.

Report cards from LVMH, home of Louis Vuitton leather goods and Dom Pérignon champagne, as well as casino operators in Macau offer signs that the trade fight with the US and the accompanying economic slowdown aren't entirely derailing the China-led boom in top-end retail. That's helping to offset gloomier scenarios in BMW and Mercedes showrooms and luxury real-estate offices.

French giant LVMH said Tuesday its luxury retailer DFS performed especially well at the key Chinese tourist destinations of Hong Kong and the gambling enclave of Macau, while the company's wines and spirits business "grew rapidly" in China, too. Across the world, "all geographical areas progressed well," LVMH said, as it reported a 10 per cent jump in third-quarter sales.

The economic standoff between the US and China escalated last month when President Donald Trump slapped a 10 per cent duty on US$200 billion of Chinese imports including handbags, and said the levy will jump to 25 per cent in 2019. China said it would retaliate with levies on US$60 billion worth of US goods. As retailers pass on the duties to consumers and Chinese markets sell off, the tit-for-tat spat has raised concerns shoppers would rein in spending.

Chinese consumers make up the lion's share of growth for the luxury business as an increasing number of families cross the income threshold to become affluent.

Relief also showed up in Macau during the Golden Week holiday, which is often seen as a thermometer for China's economy. Chinese tourist arrivals in the world's largest gaming centre for the period that ended Sunday jumped 14 per cent from a year earlier. High rollers bet 10 per cent more in the first six days of October than in the same period last year, according to Morgan Stanley.

Still, the casinos' robust performance isn't wiping out analyst concerns that the industry will grow at a slower pace in the next few months amid a weakening macro economy in China. 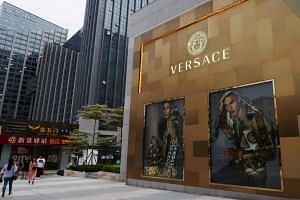 Other sectors of the luxury market weren't so fortunate during Golden Week. While the holiday is typically a buoyant period for new-home sales, transactions this year were the lowest since at least 2014, according to China Securities Co. Official home-sales data for October is due next week.

LVMH shares jumped 1.4 per cent in Europe on Tuesday after reporting its improved results, helping to reverse losses earlier this month.