TOKYO (REUTERS) - Japan's exports fell for a third straight month in February in a sign of growing strain on the trade-reliant economy from slowing external demand and a US-China tariff war.

Ministry of Finance data showed on Monday (March 18) exports fell 1.2 per cent year-on-year in February, more than a 0.9 per cent decrease expected by economists in a Reuters poll.

It followed a sharp 8.4 per cent year-on-year drop in January, marking a third straight month of falls due to declines in shipments of semiconductor production equipment and cars.

The trade data comes on top of a recent batch of weak indicators, such as factory output and a key gauge of capital spending, which have raised worries that a record run of postwar growth may come to an end. Some analysts say a recession cannot be ruled out.

The Bank of Japan last week cut its view on exports and output, while keeping policy unchanged. Yet, extended weakness in exports could put it under pressure to deliver more easing, especially as inflation remains well off its 2 per cent target and pressure on businesses and consumers continues to rise.

Slowing global growth, the US-China trade war and complications over Britain's exit from the European Union have forced policy makers around the world to shift to an easing stance over recent months. 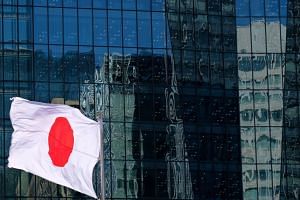 Monday's trade data showed exports to China, Japan's biggest trading partner, rose 5.5 per cent year-on-year, rebounding from a 17.4 per cent drop in January. However, overall trade to the Asian giant remained weak, as even after averaging effects of the Lunar New Year holiday, China-bound shipments declined 6.3 per cent in the January-February period from a year earlier.

Japan's shipments to Asia, which account for more than half of overall exports, fell 1.8 per cent, down for a fourth straight month.

US-bound exports rose 2.0 per cent, but imports from the United States grew 4.9 per cent, resulting in Japan's trade surplus with the country declining 0.9 per cent year-on-year to 624.9 billion yen in February.

Japan's still-large surplus with the United States raises concerns among Japanese policymakers and auto exporters that Washington may impose hefty duties on its imports, analysts say.

Imports of Japanese cars make up about two-thirds of Japan's US$69 billion annual trade surplus with the United States, making Tokyo and Beijing targets of criticism by Trump.