TOKYO (REUTERS) - Japan has cut its assessment of exports in January for the first time in three months due to the trade war between the United States and China in a warning that the fallout is spreading to the world's third-largest economy.

The Cabinet Office, which helps coordinate government policy, said on Tuesday (Jan 29) that exports have weakened recently in its monthly economic report for January. This marked a downgrade from last month when it said exports had flattened.

Shipments of electronics and semiconductor manufacturing equipment to China have slowed sharply because of the trade dispute and waning smartphone demand, making it more difficult for Japan's policymakers to ensure healthy economic growth.

"We need to keep in mind that there is uncertainty about how trade disputes and China's economic outlook will affect the global economy," the report said.

Japan's exports in December fell 3.8 per cent from a year earlier, its sharpest year-on-year decline since October 2016, dragged by plummeting shipments to China. Exports account for around 17 per cent of the country's GDP (gross domestic product).

The Cabinet Office left unchanged its overall assessment that the economy is in gradual recovery, but many economists have warned that growth this year will not be as robust as last year because of increasing risks to the outlook.

In addition to the US-China trade row, Japanese policymakers are wary of Britain's departure from the European Union and the risk of a sudden spike in the yen. 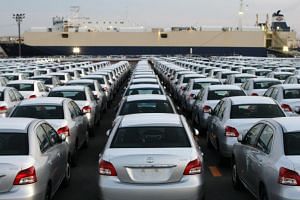 Consumer prices have levelled off, according to the monthly economic report for January. Last month, the government said gains in consumer prices were slowing.

The government said consumer spending in January was recovering, unchanged from the previous month.

The government also left unchanged its assessment that capital expenditure was increasing.

Japanese Prime Minister Shinzo Abe's Cabinet will submit a record US$900 billion draft budget for the next fiscal year starting in April to parliament in the coming days that is already boosted by spending to offset the impact of a planned sales tax increase.

The government has also budgeted extra infrastructure spending for the current fiscal year, so it has little room to take further steps if the economy weakens further this year.