WASHINGTON (REUTERS) - The head of the Federal Reserve warned on Wednesday (May 13) of an "extended period" of weak economic growth, vowed to use the US central bank's power as needed, and called for additional fiscal spending to stem the fallout from the coronavirus pandemic.

Fed Chair Jerome Powell issued his sober review of an economy slammed by a record pace of job losses and bracing for worse ahead as most US states moved toward reopening after weeks of shutdowns aimed at slowing the spread of the novel coronavirus.

The pandemic has killed more than 82,000 people in the United States so far, and many epidemiological models now point to a death toll that will surpass 100,000 in a matter of weeks.

Powell pointed to uncertainty over how well future outbreaks of the virus can be controlled and how quickly a vaccine or therapy can be developed, and said policymakers needed to be ready address "a range" of possible outcomes.

"It will take some time to get back to where we were,"Powell said in a webcast interview with Adam Posen, the director of the Peterson Institute for International Economics.

"There is a sense, growing sense I think, that the recovery may come more slowly than we would like. But it will come, and that may mean that it's necessary for us to do more."

For a central banker who spent part of his career as a deficit hawk and has tried to avoid giving advice to elected officials, the remarks marked an extraordinary nod to the risks the US economy is facing from the combined health and economic crisis brought on by the pandemic.

The US central bank has slashed interest rates to near zero and set up a broad network of programs to ensure financial markets continue to function during the pandemic. It has also established precedent-setting lending facilities for companies and the first-ever corporate bond purchases.

Congress, for its part, has allocated nearly US$3 trillion (S$4.2 trillion) for economic relief during the crisis.

The US response to date "has been particularly swift and forceful," Powell said.

But the longer those health risks persist, he said, the more likely businesses will fail and households will be strapped for income in a downturn that he noted has fallen most heavily on those least able to cope. 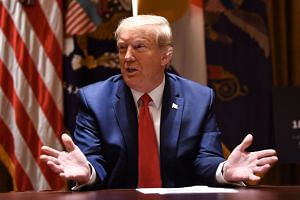 US stocks tumble as Fed chief warns downturn may be long

A recent Fed survey, Powell said, estimated that 40 per cent of households with less than US$40,000 in income included someone who has lost a job since February.

The worst-case outcome leaves the economy mired in "an extended period of low productivity growth and stagnant incomes... Additional fiscal support could be costly but worth it if it helps avoid long-term economic damage and leaves us with a stronger recovery," Powell said in what amounted to a direct call for Congress to ramp up its aid during the crisis.

"This trade-off is one for our elected representatives, who wield powers of taxation and spending," he said.

The Fed, for its part, will continue to "use our tools to their fullest until the crisis has passed and the economic recovery is well under way," Powell said.

But those tools, he made clear, don't include pushing interest rates below zero, as some other central banks did fighting the global financial crisis more than a decade ago.

Negative interest rates, he said, are "not something that we are considering."

Major US stock indexes were sharply lower in midday trading, with the benchmark S&P 500 index down about 1.6 per cent.

Yields on Treasury securities fell, and some contracts in interest rate futures markets continued to price in a small chance the Fed might resort to a negative-rates policy within the year.

The US House of Representatives and Senate are deliberating further responses to the pandemic. White House officials have said they want to assess how an initial round of economic reopenings by states goes before deciding what to do.

An increasing number of US governors have lifted restrictions, moves that in other countries have preceded new outbreaks and increases in cases, and that epidemiologists here fear will do the same.

But with the US economy having lost a staggering 20.5 million jobs in April alone and some 33 million Americans applying for jobless benefits since late March, many state and local leaders have begun to see the economic risks of continued lockdowns as too high.

In a Senate hearing on Tuesday, Anthony Fauci, director of the National Institute of Allergy and Infectious Diseases, spoke of the risk the country could "paradoxically" end up worse off if it reopens too haphazardly and ends up with not just new rounds of infections, but a second wave of restrictions on who can go to work and what businesses can stay open.