Rising xenophobia may well put the kibosh on Singaporeans aspiring to live and work in the United States, Britain, Australia and New Zealand, as the authorities in those countries move to tighten rules for skilled work visas amid heightened tension over immigration.

Australia's abolition of the 457 visa programme, which allowed workers to stay for up to four years and eventually seek permanent residency, could potentially affect up to 875 Singaporeans, according to data from Australia's Department of Immigration and Border Protection.

Under the new rules, workers can now either apply for a two-year or a four-year visa, but only the latter will lead to residency. In addition, some 216 occupations to which the visa applies - including biochemist and multimedia designer, among others - have been cut. The changes will likely affect visa applications lodged after April 19 and those seeking to extend their visas or change employers, immigration specialist Newland Chase Australia managing director Tony Le Nevez said.

The changes could also affect about 8,000 Singaporeans who study at Australian universities each year, and who plan to stay on and work after graduating. 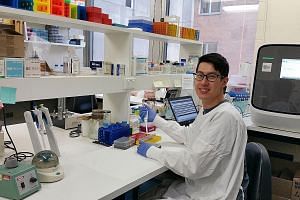 The Australian government has also made it harder for migrants to become citizens. They now have to wait four years before applying for citizenship, instead of one year.

But the Department of Foreign Affairs and Trade said the changes will not affect plans to increase the flow of workers between Australia and Singapore under the Free Trade Agreement and the Australia-Singapore Comprehensive Strategic Partnership.

"Australia's commitments under the Singapore-Australia Free Trade Agreement (SAFTA) and the Agreement to Amend SAFTA are not affected by the recently announced citizenship or visa reforms," a department spokesman told The Straits Times.

In a similar vein, New Zealand also made it harder for migrants to receive skilled visas by raising the minimum income required to NZ$49,000 (S$47,193).

The changes follow record levels of immigration to New Zealand which have sparked concerns about congestion and housing supply.

In the case of H-1B visas, the agencies are to suggest changes to help ensure that these are awarded to the most skilled and best-paid immigrant workers. These visas are in hot demand around the world among skilled professionals, especially those working in the tech sector.

Fast-track processing of the H-1B was suspended as of April 3 for up to six months but there have been no announced changes to normal processing times and "no expected changes to wait times for visa interviews or visa process times", US Embassy Singapore spokesman Camille Dawson said.

Ms Becki Young of Hammond Young Immigration Law in Maryland said the intent of the executive order is both to protect US workers and to combat fraud.

"They are very interested in large employers like Cognizant, Infosys and Tata, which are the biggest users of the H-1B visas, and are most concerned with those employing lower-level skilled workers."

Some observers note that the H-1B programme may depress the wages of US workers, since the primary objective of some companies in the tech industry is to employ lower-paid skilled workers.

Mr Ranjan Guha, California-based Interra IT's president, North American operations, said: "The skills sets are available in the US, (but) maybe not in the volumes that are required. If workers are genuinely unavailable locally, some form of correction will take place. ... There will be pressure from industry itself."

Meanwhile, the British government tightened work visa rules by raising the salary threshold for new non-European Union applicants of its Tier 2 skilled worker visa earlier this month to £30,000 (S$54,000) a year from £25,000 a year.

It also made hiring foreigners more expensive for companies, setting a £1,000 "immigration skills charge" to deter firms from taking on migrant workers. This, after Home Secretary Amber Rudd warned businesses that foreigners should not be able to "take jobs that British people should do."

The Straits Times understands that the tightening work visa rules are not an issue for local companies like Singtel, which has operations in Australia and the US. That is because its operations are mostly staffed by locals there.

The tightening of work visa rules in those countries will likely hinder Singaporeans' ability to work there, but there are alternatives within Asean under the regional integration initiative Asean Economic Community (AEC), which could help boost Singapore's growth even as its working population ages, Oxford Economics Asia economist Sian Fenner said.

Some economists have estimated that allowing free cross-border movement of labour could more than double the world's gross domestic product. A proponent, Mr Michael Clemens, a senior fellow at the US Centre for Global Development, maintained that barriers on immigration amount to leaving "trillion-dollar bills on the sidewalk".

NOT ALL FOLLOWING SUIT

Fortunately, not all governments are turning xenophobic. India and Singapore are in talks over easing restrictions for Indian software companies here, in the review of the Comprehensive Economic Cooperation Agreement.

China recently launched a reform of its green cards to try to lure more foreign professionals to take up permanent residency. Renewable every five or 10 years, it allows PRs to live in China, buy property and enrol their children in public schools.

The reforms include issuing new ID cards this year that will have foreigners' identity information embedded in the chips of the machine-readable cards, which can be used at railway and airline departments, hotels and banks.

That should make it easier to access public services in China by June, Xinhua news agency reported on April 17.

A version of this article appeared in the print edition of The Straits Times on May 02, 2017, with the headline 'Harder for skilled S'poreans to live, work overseas'. Subscribe
Topics:
More
Whatsapp Linkedin FB Messenger Telegram Reddit WeChat Pinterest Print Purchase Article Copy permalink