Pact will do away with nearly all Customs duties; two more agreements with S'pore get go-ahead

The European Parliament has given the green light to a landmark trade agreement with Singapore that is set to remove nearly all Customs duties between the two jurisdictions.

Following a majority vote in favour of the European Union-Singapore Free Trade Agreement (EUSFTA) yesterday in France, the pact can be ratified and come into force. Two other agreements were also given the go-ahead.

Calling this an important milestone in Singapore's bilateral relations with the EU, Minister-in-charge of Trade Relations S. Iswaran said that "Singapore and EU companies, in particular our small and medium-sized enterprises, can look forward to significant benefits from the reduction of tariff and non-tariff barriers".

The EUSFTA eliminates duties, allowing 84 per cent of Singapore exports to enter the EU duty-free once it comes into force. This includes that on Asian food products and electronics.

Further benefits include having material from Asean deemed as originating from Singapore when incorporated into certain final products, enabling these items to qualify for preferential tariff treatment.

Singapore will remove remaining tariffs on EU products and commit to retaining current duty-free access for other EU products as well. It will also remove other obstacles such as by recognising the EU's safety tests for cars and electronic appliances.

There are more than 10,000 European companies in Singapore, and the EU is Singapore's third largest trading partner.

Two other deals with Singapore also received majority support in the European Parliament, though they will need to be approved by regional and national Parliaments of member states before they can enter into force. One of them is the EU-Singapore Investment Protection Agreement (IPA), which will replace 12 existing bilateral investment treaties between Singapore and various EU member states, encouraging investments and setting out rules giving investors protection. 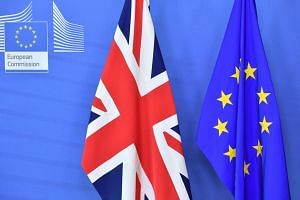 EU-S'pore FTA on track for ratification

The other is the EU-Singapore Partnership and Cooperation Agreement, which provides a framework to deepen cooperation in key areas, from transport to science and technology.

The FTA and IPA are "strategic pathfinders to an eventual EU-Asean trade and investment agreement", said Mr Iswaran. He added that they underlined a shared commitment to open trade.

The FTA is a positive development given uncertainties on how long US-China trade tensions may last, OCBC Bank's head of treasury research and strategy Selena Ling told The Straits Times. She added that the EU market can provide some buffer to companies here.

The EUSFTA has been over a decade in the making, with European Parliament member and EUSFTA rapporteur David Martin saying in a parliamentary debate on Tuesday that "while (US President) Donald Trump wants to build walls to separate nations, we are… keeping fair and free trade alive".

Commissioner for Trade Cecilia Malmstrom added: "In uncertain times, we need agreements like these more than ever."

Other leaders noted that the Republic is a gateway for EU firms to access economies such as China. They said that as the first bilateral trade pact signed between EU and an Asean country, it could be a model for future agreements with others in the region.