SINGAPORE (BLOOMBERG) - Goldman Sachs Group added its voice to those advising against panic over the inversion of the US yield curve, which has served as a recession warning in the past.

The proportion of the yield curve that's inverted isn't as high as in past recessions, and part of the reason 10-year Treasury yields have slumped can be attributed to dynamics outside the US, Goldman strategists led by Alessio Rizzi and Christian Mueller-Glissmann wrote in a note on Monday (March 25). American credit spreads also aren't telegraphing stress, they highlighted.

While 10-year yields fell below three-month rates for the first time since 2007 on Friday, they remain above those on two year notes. Inversion has traditionally been considered an omen of recession in the US within the next 18 months or so.

"Recession risk remains somewhat low even amid an environment of lower returns" and a high rate of change for volatility itself, the Goldman strategists wrote. While the economic backdrop indeed may be less favorable, hurting profit growth, "equity and risky assets in general can have positive performance with a flat yield curve," they wrote.

It's all consistent with the Goldman strategists' conclusion for some time now that risk assets will see "low but positive returns."

Others agree that things aren't so dire. Fidelity International is among those anticipating a pick-up in growth later this year. Andrea Iannelli, a London-based investment director at the fund manager, wrote Tuesday that "given how much pessimism is already baked into prices, we favor an underweight stance to US rates."

At Morgan Stanley, strategist Matthew Hornbach thinks the three-month-10-year inversion would need to continue at least until the June Federal Reserve policy meeting before policy makers get "uncomfortable. If it continues beyond that, the Fed may begin to contemplate actions necessary to keep the party going." 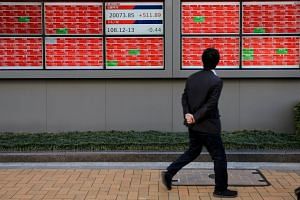 For his part, Chicago Fed President Charles Evans said on Monday that yield curves recently have been "throwing off a slightly higher probability of recession" but they have "often misfired" in the past. "It is certainly something to be paying attention to."

Former Fed Chair Janet Yellen said in Hong Kong on Monday that inversion happens very easily and doesn't signal on its own that a US recession is imminent.

A simple model shows the probability of a US recession at a "relatively high 20 per cent over the next 12 months," according to Westpac Banking Corp foreign-exchange strategy head Richard Franulovich. However, "a broader recession probability model that incorporates equities, credit spreads and the ISM manufacturing survey points to very negligible recession risk."

Franulovich highlighted that "equity market momentum remains much stronger than what is typically seen into recessions," and "the same applies for both the ISM index and credit spreads."