SINGAPORE (REUTERS) - Freight rates for dry-bulk and container ships, carriers of most of the world's raw materials and finished goods, have plunged over the last six months in the latest sign the global economy is slowing significantly.

The Baltic Dry Index, measure of ship transport costs for materials like iron ore and coal, has fallen by 47 percent since mid-2018, when a trade dispute between the United States and China resulted in the world's two biggest economies slapping import tariffs on each other's goods.

Dry-bulk commodities are taken as a leading economic indicator, because they are used in core industrial sectors like steelmaking and power generation, and analysts say the recent declines in activity point to a serious economic slowdown.

"Signs that the US and China remain well apart in trade talks continued to weigh on sentiment in commodity markets," ANZ bank said in a note on Friday.

This was after US Commerce Secretary Wilbur Ross said on Thursday (Jan 24) that the United States and China were "miles and miles" from resolving their issues.

"While dry-bulk rates often face at least some pressure during the early stages of a year, the magnitude of the declines being seen lately have been very rare," he said. 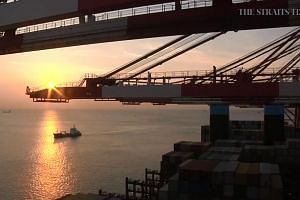 The Baltic index has lost a quarter of its value since the start of the year, and dry-bulk is not the only shipping market under pressure.

The Harpex Shipping Index , which tracks container rates, has dropped by 30 per cent since June 2018.

As a measure of the demand for shipping manufactured goods from producers to consumers, container rates are also seen as a leading economic indicator.

In the euro zone, a survey published on Thursday showed that business growth nearly stalled out at the start of 2019 as trade tensions and political woes meant incoming new work fell for the first time in over four years.

In China, the National Development and Reform Commission (NDRC) this week warned the downward pressure on the economy would impact its job market as falling factory orders point to a drop in activity in coming months.

The United States has so far been in a better shape than other leading economies, but even there, manufacturing indices have been reflecting weakness since late 2018.