SINGAPORE - A new committee has been set up to boost research cooperation between France and Singapore in the areas of science and technology.

Its work will involve research organisations, universities and companies from both countries with the first official meeting expected in the second half of this year.

Finance Minister Heng Swee Keat announced the initiative at the closing of the second Singapore-France Economic Forum on Friday (March 15), saying: "In a world that is rapidly changing and increasingly interconnected, countries need to collaborate. No country has all the expertise it needs.

"We will all need to find new solutions to future-proof our infrastructure, manage rising healthcare costs, and rethink the role and future of education."

He told the event that the move builds on what Singapore and France have achieved together.

It also sets the stage for collaboration on medium-term initiatives and momentum for new undertakings.

The end of the two-day forum held in the Lee Kuan Yew School of Public Policy marks the closing of the 2018 France-Singapore Year of Innovation as well, which was aimed at intensifying cooperation between both countries. 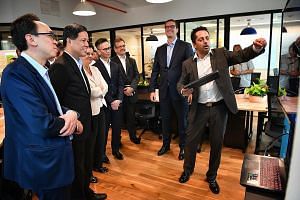 "Both Singapore and France believe that innovation is key to our future," said Mr Heng. "Innovation enables us to better tackle many social, economic and security challenges that we are facing.

"Hence, we are both seeking to make (it) pervasive throughout our society, and investing significantly in these efforts."

The new committee will be spearheaded by the French Ministry of Higher Education, Research and Innovation and Singapore's National Research Foundation.

French Minister of State for the Digital Sector Mounir Mahjoubi said yesterday: "We believe that innovation can transform tomorrow's economy and society, and that innovation is the answer to challenges we think we are facing today - only if we are able to integrate it with everybody."

He added that "technology has to have something for everyone in the country".

The Year of Innovation encompassed around 60 events organised with the involvement of the business and scientific communities, including the launch of the Global Innovation Alliance, a network to promote entrepreneurship and innovation.

The year was marked by several high-level exchanges as well, including an official visit by Prime Minister Lee Hsien Loong, who was French President Emmanuel Macron's guest of honour during the Bastille Day celebrations on July 14 last year.

About 20 research and cooperation agreements were signed during the year of innovation in new areas of cooperation such as artificial intelligence, health and space.

This will "bring young talent from Singapore to France and help to strengthen university-industry ties".

The programme, co-funded by the French government, French companies and Singapore universities, will help those who want to intern with French firms, ideally in France.

Nanyang Technological University, the National University of Singapore, as well as 10 French companies, including Thales and ST Micro, are involved.

A series of scientific lectures will also be implemented this year in both countries.

Mr Mahjoubi noted: "Some might think that the need to cooperate and propose creative solutions is less pressing than 10 years ago, but (they) are wrong.

"If we think in the unilateral way of the protectionist, then we can't work ... we should keep working together, harder than ever, towards finding the most efficient multilateral solutions."