WASHINGTON (BLOOMBERG) - Former Federal Reserve Chair Janet Yellen said the US central bank must rely on incoming economic data to determine if its next policy move will be up or down, while likening the current moment to 2016 when she kept interest rates on hold almost all year.

"It's not out of the question that the Fed may need to raise rates again," Yellen said on Wednesday (Feb 6) in an interview on CNBC, before acknowledging that a cut may also be in the cards.

"If global growth really weakens and that spills over to the United States, or if financial conditions tighten more and we do see a weakening in the US economy, it's certainly possible the next move is a cut, but both outcomes are possible."

Yellen's successor at the US central bank, Jerome Powell, made a dramatic revision to the Fed's messaging in January, suggesting the Fed may be done raising interest rates in this economic expansion. On Jan 30, the Fed's post-meeting statement said officials would be "patient" on policy and signaled the next adjustment for rates may be up or down.

That's a sharp turn from mid-December when Fed officials penciled in two hikes for 2019.

Yellen said she continued to see the US economy as "solid and strong," driven by consumer demand that is being boosted by rising wages.

"I still expect the most likely outcome is solid growth in 2019" even as growth will likely come in well below the 3 per cent level probably achieved last year, she said.

She also outlined a number of threats, including slowing global growth, disruptions to international trade, the UK's impending exit from the European Union and a tightening of financial conditions. 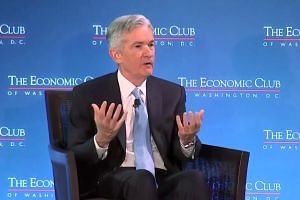 Fed can be patient as US economy evolves in 2019, says chairman Jerome Powell

"What's going on now reminds me a lot of 2015, 2016," she said. Under her leadership, policy makers pivoted from projecting four rate hikes for the year to making a single move in December as spillovers from weaker growth in China dented the US outlook. Powell has also invoked the experience of 2016 to emphasize the importance of policy flexibility.

The Fed's hand should also be stayed, she said, by the lack of any serious inflationary pressures.

"Now that they're in a range of neutral, it's not necessary to act preemptively," she said.

Yellen served one term as Fed chair from 2014 to 2018. President Donald Trump broke with recent tradition by not offering her a second term in favor of Powell. She is now a fellow at the Brookings Institution think tank in Washington.