SINGAPORE - The finance sector has a "powerful role" to play in helping to offset the effects of climate change in South-east Asia, an especially vulnerable region, said an executive from the World Wide Fund for Nature.

"The climate-related negative impacts will result in annual economic losses of 6.7 per cent of the Asean region's gross domestic product by 2100, which is far higher than the global average of 2.6 per cent," she said on the second day of the forum at the Lee Kuan Yew School of Public Policy.

Yet despite signing up to the 2015 Paris Agreement on climate change, many Asean countries are not doing enough to help keep the global temperature rise this century below 2 degrees Celsius above pre-industrial levels, Ms Stampe noted.

Common reasons include a lack of funding and the need to electrify countries rapidly.

This means "non-state players must and can drive change", she said.

Ms Stampe suggested financiers could move away from funding unsustainable projects given that 88 per cent of Asean's fossil fuel generation assets, as well as 56 per cent of planned assets, are incompatible with Paris targets. 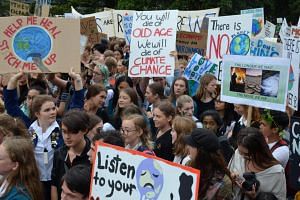 "If governments lack ambition to scale up clean energy to shift away from coal, the financiers can pull away from financing new 30- to 40-year assets that will bust the carbon budget," she said.

They can also lobby governments to create transparent bidding processes and power-purchase agreements that take into account renewable energy assets that have a higher upfront cost and lower running cost, Ms Stampe added.

There are also more tools that companies can use to align their expansion plans with suitable technologies, and redefine their business models to fit a new, low-carbon sustainable economy.

Ms Stampe said that more can be done to increase the yield of smaller oil palm plantations rather than continue with deforestation-related expansion.

She was speaking at a panel discussion on addressing climate change moderated by Professor Patrice Geoffron of French think-tank Le Cercle des economistes.

Fellow panellist Benedict Chia, the Singapore National Climate Change Secretariat's director for strategic issues, spoke about the Republic's emissions targets, including its aim to increase the adoption of solar energy to 350 megawatt peak by 2020 and to one gigawatt peak beyond that.

He added that Singapore has moved away from fuel oil to natural gas, which is the cleanest form of fossil fuel, and is working towards increasing its deployment of renewables.

Mr Chia also tackled a question on carbon taxes raised by an audience member who asked why such levies, which penalise the consumer, are adopted rather than measures focused on oil giants.

He responded by noting that the tax is an economically efficient way to address climate change as it sends a signal through the economy and gets people to reconsider what they can do to reduce emissions.

He added that Singapore is taking other measures as well such as a greater shift to electrification, including in vehicles.