WASHINGTON (REUTERS) - Federal Reserve chairman Jerome Powell, pledging to "strike a balance" between the risk of an overheating economy and the need to keep growth on track, told US lawmakers on Tuesday (Feb 27) that the central bank would stick with gradual interest rate increases despite the added stimulus of tax cuts and government spending.

Fed policymakers anticipate three rate increases this year, and Powell gave no indication in prepared remarks to the House Financial Services Committee that the pace needs to quicken even as the "tailwinds" of government stimulus and a stronger world economy propel the US recovery.

"The (Federal Open Market Committee) will continue to strike a balance between avoiding an overheating economy and bringing ... price inflation to 2 percent on a sustained basis," Powell said in prepared remarks for his first monetary policy testimony to Congress as Fed chief.

"Some of the headwinds the US economy faced in previous years have turned into tailwinds," Powell said, noting recent fiscal policy shifts and the global economic recovery.

Still,"inflation remains below our 2 per cent longer-run objective. In the (FOMC's) view, further gradual rate increases in the federal funds rate will best promote attainment of both of our objectives."

The testimony sent Powell's first signal as Fed chief that the massive tax overhaul and government spending plan launched by the Trump administration will not prompt any immediate shift to a faster pace of rate increases.

"Gradual" has been the operative word since the Fed began raising rates under Powell's predecessor, Janet Yellen, in late 2015.

The Fed is expected to approve its first rate increase of 2018 at the next policy meeting in March, when it will also provide fresh economic projections and Powell will hold his first press conference.

"This is a continuation of where this Fed was under Chair Yellen," said Robert Albertson, principal and chief strategist at Sandler O'Neill & Partners in New York.

"They are normalising, they are not tightening... The surprises, if we are going to see them, are going to be after more data comes out in the next month or two," and accounts for things like the tax cuts and whether business investment spending continues higher, he said.

Market reaction was muted. US stocks were trading slightly lower while the dollar was stronger against a basket of currencies. Prices of US Treasuries were mixed.

Powell's appearance before the House panel is his first as Fed chief. He used his prepared remarks to strike notes likely to be welcomed by the Republican majority on the panel - including promises of "transparency" and a nod to the monetary policy rules some of them favour. 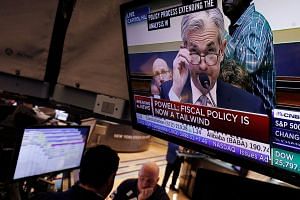 US stocks stumble on revived worries over Fed

But in his remarks and in a monetary policy report issued to Congress by the Fed last week he also stuck close to a safe script, mentioning none of the new initiatives that some of his colleagues have pushed for, such as a review of the Fed's system for managing inflation.

That report acknowledged "valuation pressures" in parts of the economy, and noted the recent return of volatility in stock markets.

Though rising long-term interest rates and recent equity market volatility have tightened financial conditions, Powell said, "we do not see these developments as weighing heavily on the outlook for economic activity, the labor market and inflation."

Rather, "the robust job market should continue to support growth in household incomes and consumer spending, solid economic growth among our trading partners should lead to further gains in US exports, and upbeat business sentiment and strong sales growth will likely continue to boost business investment," he said.