WASHINGTON (REUTERS) - The US Federal Reserve left interest rates unchanged on Wednesday (Sept 20) but signalled it still expects one more increase by the end of the year despite a recent bout of low inflation.

The Fed, as expected, also said it would begin in October to reduce its approximately US$4.2 trillion (S$5.6 trillion) in holdings of US Treasury bonds and mortgage-backed securities acquired in the years after the 2008 financial crisis.

New economic projections released after the Fed’s two-day policy meeting showed 11 of 16 officials see the “appropriate” level for the federal funds rate, the central bank’s benchmark interest rate, to be in a range between 1.25 per cent and 1.50 per cent by the end of 2017, or 0.25 percentage points above the current level.

US bond yields rose, pushing up the US dollar after the Fed’s decision, but US benchmark stock indexes were little changed.

US benchmark 10-year Treasury note yields rose as far as 2.29 per cent, the highest since Aug 8., a move which helped push bank stock prices higher also.

“The Fed took another step on its path of beautiful normalization, announcing that the gradual balance sheet reduction will start next month and limiting revisions to both projections and policy guidance,” said Mohamed El-Erian, chief economic adviser At Allianz, in California.

In its policy statement, the Fed cited low unemployment, growth in business investment, and an economic expansion that has been moderate but durable this year as justifying it’s decision. It added that the near-term risks to the economic outlook remained “roughly balanced” but said it was “closely” watching inflation. 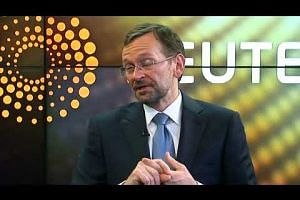 Fed chair Janet Yellen said in a press conference after the end of the meeting that the fall in inflation this year remained a mystery, adding that the central bank was ready to change the interest rate outlook if needed.

“What we need to figure out is whether the factors that have lowered inflation are likely to prove persistent,” she said.

If they do, “it would require an alteration of monetary policy,” Yellen said.

While the interest rate outlook for next year remained largely unchanged in the Fed’s latest projections, with three rises envisioned in 2018, the US central bank did slow the pace of anticipated monetary tightening expected thereafter.

It forecasts only two increases in 2019 and one in 2020. It also lowered again its estimated long-term “neutral” interest rate from 3 per cent to 2.75 per cent, reflecting concerns about overall economic vitality.

“The US Federal Reserve has firmly signalled that a December rate rise is still on the table,” said Luke Bartholomew, of Aberdeen Standard Investments Investment Strategist in London.

“Clearly the Fed still believes that lower unemployment will eventually translate into a pick-up in inflation, but if inflation continues to undershoot it is hard to see the Fed following through on a hike,” he said.

The Fed, as expected, also said it would begin in October to reduce its approximately US$4.2 trillion in holdings of US Treasury bonds and mortgage-backed securities by initially cutting up to US$10 billion each month from the amount of maturing securities it reinvests.

That action will start a gradual reversal of the three rounds of quantitative easing, or bond buying, the Fed pursued between 2008 and 2014 to stimulate economic growth after the 2007-2009 financial crisis and recession.

The limit on reinvestment is scheduled to increase by $10 billion every three months to a maximum of US$50 billion per month until the central bank’s overall balance sheet falls by perhaps US$1 trillion or more in the coming years.

Yellen said it would take a “a material deterioration” in the economy’s performance for the Fed to reverse a schedule that she expects to proceed “gradually and predictably.”

The policy statement and accompanying projections showed the Fed still in the middle of a balancing act between an economic recovery that has kept US unemployment low and is gaining steam globally and a recent worrying drop in US inflation.

Three of the hawkish policymakers appeared to move their expected policy rate down to account for only one more hike by the end of 2017, leaving a core 11 clustered around a likely December increase. The Fed has raised rates twice this year.

The Fed noted that the recent hurricanes in the United States would affect economic activity but are “unlikely to materially alter the course of the national economy over the medium term.”

Forecasts for economic growth and unemployment into 2018 and beyond were largely unchanged. Gross domestic product is now expected to grow at a rate of 2.4 per cent this year, 2.1 percent next year and 2 per cent in 2019.

The unemployment rate is forecast to remain at 4.3 per cent this year before falling to 4.1 per cent next year and remaining there in 2019.

Inflation is expected to remain under the Fed’s 2 per cent target through 2018 before hitting it in 2019.

There were no dissents in the Fed’s policy decision.