In what was seen as a shift in tone from remarks last month, Powell said Wednesday that the Fed's series of rate increases had brought policy to "just below" the range of estimates of neutral, where it neither spurs nor restricts the economy. Last month, Powell said the Fed still had a "long way" to go before it reached that equilibrium.

The Fed chief's comments sparked a surge in a stock market that had struggled of late and came in the wake of repeated criticism of the Fed's rate increases by President Donald Trump.

The Dow Jones industrial average pushed up 618 points, to 25,366, an increase of 2.5 per cent, in a surge that erased its November losses and put it back in positive territory for 2018.

The broader Standard & Poor's 500-stock index climbed 2.3 per cent, and the tech-heavy Nasdaq rose 3 per cent.

Policy makers provisionally penciled in three quarter-per centage-point rate increases for next year, according to the median of forecasts released in September's so-called dot plot. That could fall to two when officials update those forecasts at their Dec 18-19 meeting, Wrightson ICAP LLC chief economist Lou Crandall said.

Next month's expected quarter-point increase would lift the central bank's target for the federal funds rate to a range of 2.25 per cent to 2.5 per cent. That would bring it about to the bottom of the September range of neutral-rate estimates from 15 governors and regional Fed presidents, who gave figures from 2.5 per cent to 3.5 per cent.

Though Powell's comments were markedly different from his characterization of Fed policy last month, he left ample room for the Fed to continue raising rates, depending on the economy's performance. Investors have overreacted to relatively nuanced comments from Powell in the past, and it is possible some misread his comments by believing he was telegraphing an end to interest rate increases. That is not what he said. 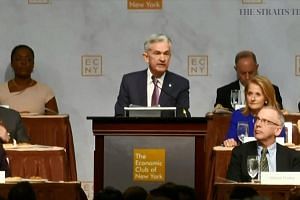 By saying rates were slightly lower than the level he perceives as "neutral," Powell's statement appears to be suggesting at least one more interest rate increase is coming in the near future.

Powell's comments appear to implicitly reject arguments from President Donald Trump that past interest rate increases have been a mistake. The chairman has repeatedly asserted the Fed's independence, and there was no sign Wednesday's suggestion the central bank may slow the pace of rate hikes is related to Trump's criticisms.

"Interest rates are still low by historical standards, and they remain just below the broad range of estimates of the level that would be neutral for the economy, that is, neither speeding up nor slowing down growth," Powell told the Economic Club of New York.

Powell said his Fed colleagues and many other economists "are forecasting continued solid growth, low unemployment and inflation near 2 per cent."

He didn't specifically cite the criticism he has faced from the White House, but he deliberately defended the Fed's recent moves and said "there is no preset policy path."

"Our gradual pace of raising interest rates has been an exercise in balancing risks," Powell said. "We know that moving too fast would risk shortening the expansion. We also know that moving too slowly - keeping interest rates too low for too long - could risk other distortions in the form of higher inflation or destabilizing financial imbalances. Our path of gradual increases has been designed to balance these two risks, both of which we must take seriously."

Trump has unloaded heaps of criticism aimed at Powell in recent weeks, as the president has blamed the central bank chief for raising interest rates in a way that Trump says has unsettled the stock market. It is very unusual for a president to criticize the Fed, which is supposed to operate independent of politics.

"I'm not happy with the Fed," Trump told The Washington Post on Tuesday. "They're making a mistake because I have a gut and my gut tells me more sometimes than anybody else's brain can ever tell me."

The Fed is tasked with maximizing employment and stabilizing prices. By controlling interest rates, it aims to prevent the economy from overheating in a way that eventually leads to a recession.

But knowing when to raise interest rates can be challenging, and people often have different opinions about how much running room the Fed should permit.

In response to questions after his speech, Powell noted recent stock market volatility but said the Fed was largely focused on slower-moving trends that tell him more about the health of the economy. He also described the Fed's cautious approach toward raising interest rates as akin to being in a room with furniture when the lights go out and then having to proceed carefully to avoid bumping into anything.

Investors noted the shift in Powell's tone from previous statements.

"Hip, hip, hooray, " said Nancy Tengler of Heartland Financial. "In October, Powell was saying we were a long way from neutral. Now he is saying we are close. That is a big shift in tone."

Powell's nuanced comments eased investor concerns about 2019. Investors had been worried that too many rate hikes at too fast a pace would raise the cost of borrowing across the board, from mortgages to car loans.

"They are going to raise rates in December. The market knows that. But investors were worried about 2019. Now it's looking for the Fed not to raise rates as much in 2019," Scott Wren of the Wells Fargo Investment Institute said.

Because inflation has remained relatively low, a number of people have said the Fed should consider pausing its pace of interest rate increases. Jason Furman, who served as President Barack Obama's top economic adviser, said on Wednesday that because price growth has "slowed" in recent weeks, the Fed should pause to better assess what is happening in the economy.

Powell's comments came the same day the Fed released a report that highlighted the near-term risks of potential international shocks to the financial system, as well as longer-term risks such as corporate debt. It said a number of risks, if mismanaged, could prove jarring to the economy.

"An escalation in trade tensions, geopolitical uncertainty, or other adverse shocks could lead to a decline in investor appetite for risks in general," the Fed report said. "The resulting drop in asset prices might be particularly large, given that valuations appear elevated relative to historical levels."

The Fed report said US banks and brokerage firms are "some of the markets most likely to be affected" by Brexit, as the Conservative government led by British Prime Minister Theresa May pushes for Britain to leave the European Union. That could lead to spillover effects in the U.S. economy overall if the large US trading partner faces an economic setback.

Additionally, total debt held by US businesses as a share of GDP is at a "historically high level," though that growth has slowed during the first half of this year. The report also points to a slowdown in the Chinese economy, which recently grew at its slowest pace since 2009.

"The UK economy is suffering from the uncertainty of Brexit, and Europe is staggering some. There's also been a slowdown in China," said Allen Sinai, chief economist and strategist at Decision Economics. "The links are to the US financial system that the Federal Reserve oversees, and these risks are worth noting."

But the report also gives cause for comfort. The Fed report notes that America's banks are strongly capitalized, well poised to absorb the kind of shocks to the financial system that sent Wall Street into a tailspin in 2008. Insurance companies, too, are in a safer position than they were before the 2008 financial crisis, according to the report.