HONG KONG (REUTERS) - Chicago Federal Reserve Bank president Charles Evans said on Monday (March 25) that it was understandable for markets to be nervous when the yield curve flattened, though he was still confident about the US economic growth outlook.

In what many see as a bad omen for the US economy, yields on the benchmark US 10-year Treasury notes fell further below three-month rates in Asia on Monday, an inversion that in the past signalled the risk of economic recession.

The yield curve inverted on Friday for the first time since mid-2007.

"We have to take into account that there's been a secular decline in long-term interest rates," he said in comments at the Credit Suisse Asian Investment Conference in Hong Kong, days after the Fed signalled an end to its tightening and abandoned plans for further rate hikes in 2019.

"Some of this is structural, having to do with lower trend growth, lower real interest rates," he said. "I think in that environment it's probably more natural that yield curves are somewhat flatter than they have been historically."

On the sidelines of the conference, Mr Evans told CNBC in an interview that he could understand why investors were more "watchful, waiting and looking", adding that the Fed was doing the same. But, he added, economic fundamentals were "good" and he expected growth to be around 2 per cent this year.

"Your first reaction is gonna (be), 'Wow, this is less than what we had', and I think this is missing the message."

On the monetary policy outlook, Mr Evans said it was a good time for the US central bank to pause and adopt a cautious stance, adding he did not expect any interest rate hikes until the second half of next year. 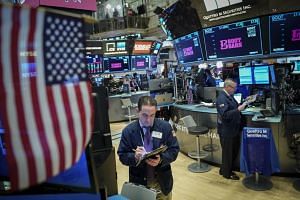 Softening his tone from a few months ago, Mr Evans, who votes on interest rate policy this year, said monetary policy was neither accommodative nor restrictive at this point.

"I see things impeding inflation a bit, and I want to see inflation get up. So my own path is not to expect a funds rate increase until next year, probably the second half," Mr Evans said.

In January, he said the Fed could hike interest rates three times in 2019 assuming the US economy remained reasonably strong.

Last week, the US central bank left rates steady in a range of 2.25 per cent to 2.5 per cent. Fresh forecasts showed 11 of 17 Fed policymakers expected no rate change for the rest of the year, up from just two in December.

That unexpectedly dovish signal had financial markets quickly pricing in a rate cut next year.