SINGAPORE - Singapore's February exports logged their first decline in six months, disappointing economists who had expected another month of growth amid the ongoing global economic upturn.

Non-oil domestic exports (NODX) shrank 5.9 per cent in February from the same month a year earlier.

This was the first decline since September last year and was likely due in part to the Chinese New Year, which started on Feb 16.

This is what some economists are saying about the latest numbers.

DBS senior economist Irvin Seah: "Before one starts feeling jittery about the outlook, it may be worth noting a few factors.

First, the Chinese New Year (CNY) effect. This is a common phenomenon in the first three months of every year.

Due to the alternative month (between January and February) nature of the festive season, it often creates significant base effect on the NODX. 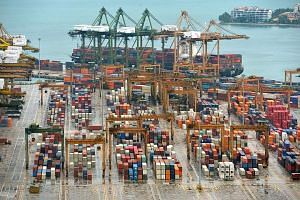 This is particularly exacerbated by the fact that plants in China - a big market for Singapore manufacturers - will typically ramp up their production ahead of the CNY before shutting down their production entirely during the festive period. Indeed, that explains the 12.9 per cent spike in the previous month, followed by a 5.9 per cent dive in February. Plainly, if one averages the numbers for both months, we still have a decent 3.5 per cent expansion.

Secondly, non-electronics exports have been a drag. Non-electronic NODX declined by 3.4 per cent in February, after the 20.7 per cent expansion in the previous month. Except for petrochemicals, non-monetary gold is more of an anomaly in the context of Singapore's trade while pharmaceuticals has an industry cycle of its own.

Next, it's the stage of the cycle that we're in. The beginning of 2017 marks the early stage of a recovery phase. Almost every externally oriented economic indicator is heading up. Double-digit NODX growth was a common feature. NODX surged by 9.2 per cent in 2017, so that means a higher trajectory to compare with. So simply focusing on the year-on-year number could be misleading."

(But) we are reluctant to extrapolate from Singapore's weak exports readings for the broader electronics growth recovery.

Several other Asian countries reported much stronger January to February exports, including China (up 23 per cent), Vietnam (up 26 per cent), and Korea (up 13 per cent). Singapore's February industrial production (out on March 26) will help provide a fuller picture on the electronics upswing, which drove manufacturing and GDP growth last year. Our working assumption is that manufacturing and export growth will slow, but remain positive in 2018 following the surge in 2017, as electronics loses steam."

UOB economist Francis Tan: "While the start of year trade data will typically be affected by the Chinese Lunar New year effect (CNY was in mid-February in 2018 while it fell in late-January in 2017), Singapore's NODX still managed to grow by 3.6 per cent year-on-year in the combined two months of January and February.

It also confirmed our long-held view that the very strong on-year growth rates in exports for most of the past year may moderate as the high base effects kick in this year.

A positive for Singapore's trade outlook is China's managed growth slowdown that will still be supportive of export demand from Singapore. But a bigger downside risk to the trade outlook is that the US' increasingly protectionist trade stance (the expected imposition of further trade tariffs on China after the steel and aluminum imports tariffs in March) could lead to a spiraling trade war, negatively impacting global trade and inevitably, Singapore's exports."