FRANKFURT (REUTERS) - The euro zone's economy is not heading for a recession but still needs support from the European Central Bank as its slowdown could last longer than expected, the head of the ECB, Mario Draghi, said on Tuesday (Jan 15).

Investors have pushed back expectations for the ECB's first interest rate hike since 2011 due to slowing growth in the euro zone and the rest of the world, which is driven by weaker activity in China and trade tensions between Beijing and Washington.

Addressing the European Parliament in Strasbourg, Draghi acknowledged the economy had been disappointing but defended the ECB and himself against criticism from some lawmakers.

"It's a slowdown, which is not heading towards a recession but it could be longer than expected before," Draghi said.

"The ECB has the tools to address (a potential recession) but our present monetary policy stance is very accommodative already."

He repeated the ECB's line that the euro zone still needed the "significant" stimulus being provided by the central bank through its negative policy rate and massive stock of bonds.

The ECB has pledged to keep rates at record lows at least until the summer and roll over the 2.6 trillion euro (S$4 trillion) stash of debt it has bought for an even longer time. 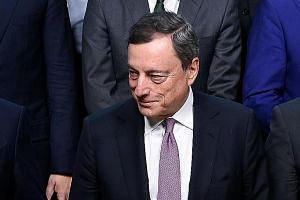 With inflation in the euro zone slowing, investors don't expect it to raise rates until 2020.

Draghi, whose mandate will run out in October after eight years in which he was credited with averting a collapse of the currency union and pulling it back from the brink of deflation, received praise from several members of parliament.

But he was criticised by some eurosceptic lawmakers, including for failing to keep inflation near the ECB's target of just under 2 per cent.

"The euro has led to low growth ... and high unemployment," said Marco Zanni, a fellow Italian from the Europe of Nations and Freedom Group. "Your mandate has seen you fail to achieve the ECB's statutory objectives."

Draghi responded by saying 9.6 million jobs had been created since 2013, more than in any other period, and that countries suffering from low growth only had themselves to blame for failing to reform their economies.