BEIJING (BLOOMBERG) - China said it would continue to open up its financial markets and encourage foreign investment amid reports the Trump administration is considering restrictions on fund flows to China.

"We will take further steps to promote high-quality, two-way financial opening and encourage foreign financial institutions and funds to invest in the domestic financial market to boost the competitiveness and dynamism of the domestic financial system," according to a summary from the eighth meeting of the Financial Stability and Development Committee posted on its website on Sunday (Sept 29).

The world's two largest economies are heading into another round of high-level trade talks following China's week-long national holidays starting Oct 1. A US crackdown on capital flows would present a new pressure point in the economic dispute, and could cause disruptions well beyond the tariffs on hundreds of billions of dollars worth of products the two sides have levied against each other.

"Chinese efforts to enhance reform and opening will be slowed down in the short term, but they will never be stopped," said Liao Qun, Hong Kong-based chief economist with China Citic Bank International Ltd. "China could explore European, South-east Asian and the Belt and Road markets in lieu of the US."

The Trump administration is considering measures including delisting Chinese companies from US stock exchanges, limiting Americans' exposure to the Chinese market through government pension funds, and putting caps on Chinese companies included in stock indices managed by US firms, according to people familiar with the internal deliberations.

The US Treasury said in a statement on Saturday that the administration "is not contemplating blocking Chinese companies from listing shares on US stock exchanges at this time". The statement did not address or rule out other possibilities.

"The US enjoys a relatively high degree of asymmetry when it comes to pressuring China here. That said, China is now increasingly interconnected with global markets, meaning that there's a big risk of blow-back against US companies as part of this strategy."

While various Chinese media republished the Bloomberg story and Treasury Department's statement, they were not immediately seen responding to the deliberations by the Trump administration. The Foreign Ministry didn't reply to a fax on Saturday seeking comment, while the Commerce Ministry didn't address the issue at a press conference on Sunday. 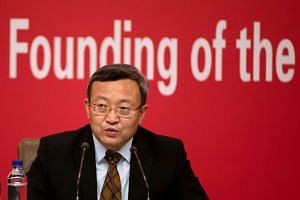 China to send its top trade negotiator to US for talks

Asia stocks give up gains as US-China optimism fades

Nasdaq cracks down on IPOs of small Chinese companies

Traders in China's markets will have to decide how to price the risk of the potential US move, which Citigroup Inc has termed the most extreme threat against China so far in the escalating rivalry between the two economies.

The CSI 300 Index declined 0.2 per cent as at 9.31am. The moves onshore may be exacerbated by thin liquidity ahead of the week-long holiday, as well as the closing of positions typically seen at quarter-end. The offshore yuan was up 0.1 per cent.

US investment in China's domestic markets is limited - residents had US$203 billion (S$280.5 billion) of long-term mainland Chinese financial assets as of June, little more than double that held in South Africa, according to the US Treasury. Far bigger is the US$1.2 trillion market capitalisation of Chinese companies on three key US exchanges as at February, according to a report by the US-China Economic and Security Review Commission.

China has been accelerating its financial opening in the past two years, promising to lift foreign-ownership caps for securities, mutual fund companies and life insurers by next year. Most recently, regulators scrapped a foreign-investment quota limit, allowing qualified overseas funds to simply register before buying onshore stocks and bonds.

Barring a major economic slowdown or change of course, foreign banks and securities companies could rake in profits of about US$9 billion a year in China by 2030, according to an estimate by Bloomberg Intelligence analysts Francis Chan and Sharnie Wong. The increasing ties between Wall Street and the Chinese market could make some of its executives important voices for China in Washington.

The State Council's Financial Stability and Development Committee is a Cabinet-level body set up in July 2017 with the aim of improving coordination of financial-sector supervision. The committee is chaired by Vice-Premier Liu He.