But he acknowledged that because many firms are feeling the effects of the economic slowdown, the Government will look at how it can help small and medium-sized enterprises "meet some of the immediate challenges" in the Budget on March 24.

"Our aim is to help companies to navigate through this very difficult period," said Mr Heng, who was speaking on the sidelines of a visit to Pan Asia Logistics Singapore in Tuas.

But he noted that it was equally important to help Singapore companies continue with the "restructuring journey", including finding new ways of doing things and looking for growth opportunities overseas.

Mr Heng, who will be presenting his first Budget, noted that Pan Asia Logistics has done just this, automating and re-engineering its work processes in order to stay competitive.

"So you have a warehouse that moves about half a million parts a year but has only about 25 workers," he said.

While times are bad for companies in some sectors, Mr Heng also noted that some others are seeing opportunities.

Mr Heng admitted that it would be hard to have policy measures that are specifically targeted at a particular industry, so they will be devised to be useful across the board and designed to help companies build longer-term competitive strengths.

Will there be 'hongbao'? 5 things to expect from Budget 2016

As the Budget is the Government's first in its new term, the surpluses accumulated in its previous term are now locked up as "past reserves".

Heng Swee Keat to present Budget 2016: Who were the finance ministers before him?

That means it will have to be "particularly prudent" this year so as to have resources when it needs to act later, said Mr Heng.

He also pointed out that Singapore is experiencing a slowdown in growth, but not a recession.

The forecast for gross domestic product growth this year remains at 1 per cent to 3 per cent.

While the Government will continue to have some social measures targeted at building a society that allows individuals to thrive, there will be a strong focus on the economy, both for the short and medium terms. 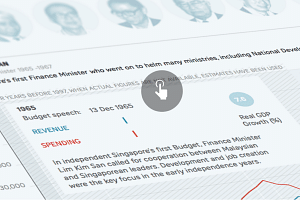 The Singapore Budget and Finance Ministers through the years

"These are the changes that we cannot avoid and the more ready we are to change, adapt and respond to the very significant shifts around us, the better we will be," said Mr Heng.

The SkillsFuture scheme will continue to take centre stage for individuals.

"The changes are coming quite rapidly, and there's a need for us to continue to learn new skills, to be able to cope with change - whether it's new skills related to what we're doing today or new skills to allow us to get into a new industry," said Mr Heng.