SYDNEY (REUTERS) - When Michael Jiang scored a liquor licence four years back, he had hoped it would help drive more sales at his struggling small grocery business in Sydney.

Fast forward to the present, and Jiang finds himself wrestling with new challenges as stingy consumers and price wars have done little to boost earnings in an economy growing at its slowest pace in a decade.

Moreover, even a welcome revival in the property market has only served to highlight a conundrum for policymakers as the 'wealth effect' of rising home prices has hardly been felt across the rest of the economy.

That has not only meant sales at businesses such as Jiang's continue to run on a low boil, but it also raises the risk that already-high household debt could worsen without a broader recovery the central bank is trying to engineer with lower rates.

"The liquor business is kind of my silver lining," Jiang said of the high-margin category from his corner shop in Pyrmont, an inner-city Sydney suburb.

"Without that I'd have closed down years ago," he added, underscoring the persistent weakness in Australia's economy even as it is set to enter a 29th straight year of recession-free growth.

"People don't want to spend. They are tightening their wallets to save for a house because interest rates are so low now."

The Reserve Bank of Australia (RBA), which delivered back-to-back rate cuts in June and July, has its work cut out given the official cash rate is already at an all-time low of 1 per cent. 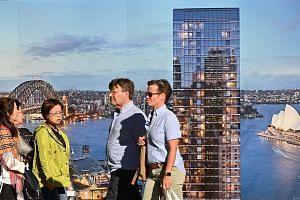 That leaves it with limited room to stimulate growth though it is still in an enviable position compared to the likes of Japan and the euro zone where policymakers have been forced to adopt negative rates to juice their economies.

The RBA easings have boosted the housing market with mortgage approvals up 5 per cent in July, the strongest in four years while auction activity in the biggest markets of Sydney and Melbourne has been solid after two years of tepid sales.

"It's too early to say whether the boom times in housing will return but the potential is there," said Miriam Sandkuhler, Melbourne-based CEO of Property Maven.

"If we start getting high auction clearance rate against high volumes it's a sign the market is moving swiftly again."

Analysts and investors widely expect two more rate cuts by the RBA to 0.5 per cent by early 2020 though there is growing doubt over how effective further easings would be when rates are already so low.

Economists overwhelmingly agree Australia's ruling centre-right coalition must embark on an expansionary fiscal programme but Prime Minister Scott Morrison is wedded to the idea of delivering a surplus this year.

A return to surplus will be lost on many as activity outside of real estate is hardly encouraging - gross domestic product (GDP) growth has slowed to decade lows, retail spending is contracting, car sales collapsing and consumer and business confidence is falling.

Policymakers will also be concerned about the increasing number of Australian companies filing for bankruptcy. Government data showed the number of companies entering external administration jumped by a staggering 15 per cent in the quarter-ended June from March. Just in July, that number surged to the highest since November 2015.

"We think that more policy stimulus is necessary to lift Australian growth and inflation," he said.

Growth in the A$1.9 trillion (S$1.8 trillion) economy slowed sharply in the second-half of 2018, largely because Australia's indebted households cut spending on everything from clothing and footwear to eating out.

That leaves policymakers walking a tight rope as any over-exuberance in the housing market could further push up the household debt to income ratio in Australia, which at 190 per cent is already among the highest in the world.

An S&P Global Ratings research this month showed mortgage arrears jumped across the Australian residential mortgage-backed securities (RMBS) sector during the past 12 months. The deterioration was most pronounced for loans more than 90 days due.