TOKYO • Key Asian exporters Japan and South Korea provided fresh evidence over the past two days that the slump in global trade has room to run, and is beginning to spread to factories.

South Korea's total exports tumbled by 12 per cent during the first 20 days of this month, while shipments of semiconductors, a key driver of growth, dropped by 27 per cent.

A day earlier, Japan reported that exports fell 8.4 per cent last month from a year earlier, the first back-to-back fall in more than two years.

One common denominator: both countries' shipments to China fell sharply, as that nation's cooling economy, the United States-China trade war, and a slowing of the global technology cycle all took a toll on world trade.

Declining activity at ports in Hong Kong and Singapore, two of the world's busiest, also demonstrated the impact of weaker demand for Chinese goods.

Japan's exports to China dropped 17 per cent in January, while South Korea's fell 14 per cent in the first 20 days of February.

The shipments to China were likely distorted at least somewhat by the Chinese New Year holiday, but the slump is in line with the longer-term trend. 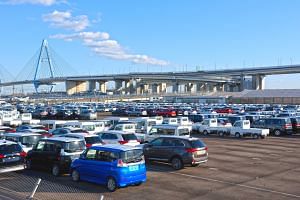 Japan's exports fall most in over two years in January

Japan manufacturing shrinks for first time since 2016 amid trade war

The slowing of trade is hurting Japan's factory sector, with manufacturing activity contracting this month for the first time in 21/2 years, according to preliminary data released yesterday.

Japan's net exports were already a drag on gross domestic product growth during the fourth quarter, according to data released last week.

In South Korea, external factors including the trade war and semiconductor cycle are the backdrop for a correction in business investment, the finance ministry said in its monthly economic assessment last week.

The Bank of Korea said in a report to Parliament last week that the prolonged trade war is hurting South Korea as well as the US and China, and it would put significant pressure on global trade and South Korean exports if it worsens.

Trade talks between the US and China are continuing this week in Washington and are scheduled to run through today.

While the slowdown in China is expected to deepen in the first quarter, analysts are seeing signs of stabilisation after that as government support measures kick in.