SHANGHAI (REUTERS) - For many in the ranks of China's wealthy, the shock devaluation in the yuan is a cause of regret - that they hadn't moved more money offshore sooner.

Now many are scrambling to shift cash out of the country, fearful that Tuesday's 2 per cent devaluation is the start of a longer-term slide in the currency, despite the People's Bank of China (PBOC) saying there is no basis for more depreciation.

"With the devaluation, I've just lost several hundred thousand yuan," said businessmen Tang Wei, who is moving assets out of China, partly to fund the living and schooling of his son in Canada next year. "In my case, there's a real need for foreign currency, so it would be better to move money out sooner than later. China's economy doesn't look very good."

There are now around 4 million households in China that have private wealth of at least US$1 million according to Boston Group Consulting, and private bankers say last month's stock market turmoil had already prompted them to make more investments overseas.

Those will have added to the capital outflows China has seen over the past year, which have been fuelled in part by expectations the United States will hike interest rates by year-end.

Analysts at JPMorgan estimate around US$235 billion of "hot money" left the country between the third quarter of 2014 and the end of the second quarter this year. 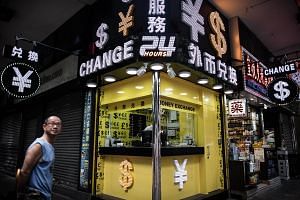 How low can it go? Analysts who predicted yuan devaluation say currency has further to fall

But if expectations build that more depreciation is on the cards, the central bank will face a dilemma of whether to let the currency stay weak to help exporters or support it to ensure the flow of money going offshore doesn't turn into a flood.

"We believe a key concern for the PBOC is that an outsized exchange rate devaluation could trigger capital flight," economists at Credit Suisse said in a research note on Tuesday.

That concern was reflected in a hastily arranged press conference on Wednesday, when the central bank tried to soothe market concerns by stressing Tuesday's move was a one-off.

Despite the calming words, money managers say many of China's wealthy are unlikely to let their cash ride on the ability of authorities to put a floor under the yuan.

"At this point the frenzy will be higher after the devaluation because they would start looking into harder assets on expectations of more devaluation," said Kunal Ghosh, Singapore-based portfolio manager at Allianz Global Investors, who helps manage US$1.8 billion in emerging market assets.

Tan Jialong, chief executive of Tan Private Wealth Management Office in Shanghai, said that since May there has been an increase in queries from his clients in China about overseas asset allocation.

"Many clients had question marks about China's economy," Tan said. "I advised them at that time to increase their overseas exposure."

He helps them move money through official offshore investment channels such as the qualified domestic institutional investor programme and cross-border investment products.

Capital controls restrict Chinese residents from taking more than US$50,000 out of the country each year.

However, many find ways to circumvent this, reflected in the fact mainland Chinese citizens are some of the biggest foreign buyers of property in markets like Australia, the United States and Canada.

"Residential property is always a popular choice if you are trying to move sums of money less than US$5 million," said Oliver Barron, a policy research analyst with China-focused investment bank NSBO. "If you need to get more out, buying companies looks like the best way," he added.

For those looking for more liquid assets, ones denominated in US dollars are likely to be their first choice.

"They would look at wherever they conceive they can preserve their wealth without any value erosion. At this point the US dollar is looking like the safest haven," said Allianz's Ghosh.