SINGAPORE - Non-oil domestic exports (NODX) in March shrank 15.6 per cent from a year ago, data out on Monday (April 18) showed, worse than the 12.3 per cent fall tipped by private sector economists in a Bloomberg poll.

Here's some quick takes from analysts:

The weak export figure raises the chances of Singapore easing monetary policy again at the next review in October:

"Today's dismal (data) proves the recent improvement in Singapore's manufacturing PMI (purchasing managers index) to be a false dawn rather than a nascent green shoot.

"There have been some encouraging signs with regional manufacturing PMIs improving notably in March. But for Singapore, a full-fledged recovery is unlikely anytime soon with new orders and new export orders continuing to contract, albeit at a slower pace.

"In sum, we remain cautious on the near-term manufacturing and export outlook. For electronics, with global semiconductor sales easing, the risk is that manufacturers continue to pull back from purchasing of inputs amid a drop in sales." 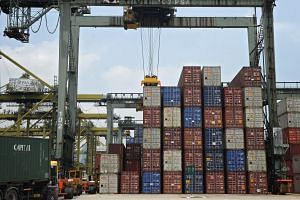 "Although the NODX contraction in March was the worst print in more than three years, we do not think that an alarm should be raised.

"Part of the reason for the sharp on-year contraction was due to a very strong gain in March 2015, where NODX grew 18.1 per cent year on year.

The strong pickup in the Baltic Dry Index, an indicator of global trade, of 48 per cent since end of March till today may bode well for global trading volume in the months ahead."

"Singapore's NODX will likely remain weak in the first half of the year. However, we are keeping our 2016 NODX growth forecast at 2.1 per cent, as an improvement will mostly take effect in the second half."