Singapore's monthly core inflation remained unchanged at 1.9 per cent last month although the market expected it to rise.

Still, the figure is a four-year high.

The past two months marked the fastest rate of increase since August 2014 when core inflation, which excludes accommodation and private road transport costs, rose 2 per cent.

Headline inflation picked up in line with expectations, inching up to 0.7 per cent from 0.6 per cent. This was mainly due to a more gradual decline in accommodation costs.

Looking ahead, Maybank Kim Eng analysts Chua Hak Bin and Lee Ju Ye foresee inflation risks to be on "the downside", as the trade war between the United States and China will likely be deflationary for countries such as Singapore.

"A weaker yuan will reduce prices of China-made products, while the US-China trade war could divert excess supply to third countries," the two analysts said yesterday.

Looking ahead, Maybank Kim Eng analysts Chua Hak Bin and Lee Ju Ye foresee inflation risks to be on "the downside", as the trade war between the United States and China will likely be deflationary for countries such as Singapore.

According to the MAS and MTI, accommodation costs fell by 2.6 per cent last month, easing from a 3 per cent dip in the month before and reflecting a slower pace of decline in housing rentals and larger increase in the cost of housing maintenance and repairs.

Private road transport costs fell by 0.2 per cent, the same pace of decline as the month before. DBS senior economist Irvin Seah said: "Higher energy prices would have filtered through to transport costs, if not for relatively lower COE (certificate of entitlement) premiums."

Food prices continued to pick up, rising 1.7 per cent last month. This came on the back of a faster pace of increase in the prices of non-cooked food items and prepared meals, said the MAS and MTI.

The overall cost of retail items rose 2 per cent because of a faster pick-up in clothing and footwear prices, and a rise in cost of personal care products after July's decline. 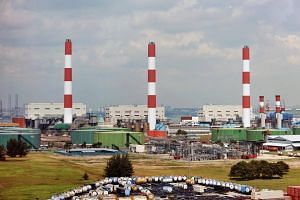 Services inflation eased to 1.3 per cent, down from 1.5 per cent in July - a dip in telecommunication service fees more than offset a faster pick-up in airfares.

On the external front, MAS and MTI said imported inflation is likely to rise mildly, noting that global oil prices are expected to average higher for the full year.

Global food commodity prices are projected to edge up as well.

Consumer price rises, however, will remain moderate, they added.

MAS and MTI expect core inflation to average in the upper half of the 1 per cent to 2 per cent forecast range for the full year.