A home loan is likely to be one of the biggest loans Singaporeans will take out in their lives. It's no wonder choosing between an HDB loan and a bank loan can be so stressful.

You might be daunted by the choices available, but it gets simpler once you know what to look out for.

First, determine the type of housing you plan to buy, and understand the key terms. Important ones include the mortgage servicing ratio (MSR), the total debt servicing ratio (TDSR), approval-in-principle (AIP) and the loan-to-value (LTV) ratio.

Most would-be home owners then find themselves at the crossroads of choosing a home loan package from either a bank or the Housing Board. There are some guiding principles that can simplify this decision-making process.

NOT ENOUGH CASH ON HAND? PICK THE HDB LOAN

HDB concessionary loans are a benefit provided by the Government, and tend to come with specific caveats on areas ranging from citizenship status to income. The interest rate for an HDB loan has not changed for more than 15 years, and remains at 2.6 per cent. 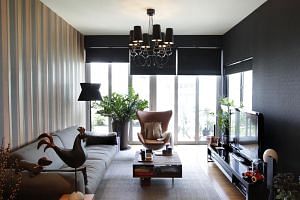 The ST Guide To... buying your first apartment

For couples with a joint income of $8,000, this repayment can usually be met entirely through their Central Provident Fund (CPF) savings, assuming that 21 per cent of their income is credited towards their CPF ordinary accounts.

For the average Singaporean, this provides stability, as repayment amounts will be relatively consistent, making monthly finances easier to manage.

HDB loans also have an LTV of up to 90 per cent, which means that prospective home owners might have to pay only a tenth of the price upfront. Furthermore, the mandatory 10 per cent down payment can be made entirely through CPF, which would leave more wriggle room in terms of budgeting for other home-related necessities.

Early repayment is not an issue with HDB loans, since no penalties are involved. Late repayments, on the other hand, incur a fee of 7.5 per cent annually.

RATE FLUCTUATION NOT AN ISSUE? TAKE THE BANK LOAN

If you are more of a risk-taker, you might prefer taking out a bank loan.

The three local banks offer fixed deposit-linked rates - which start at 1.3 per cent and have not risen higher than 2.15 per cent in the past 10 years - so this is a safe and cheap option for Singaporeans.

Since the interest rate for a bank loan could be significantly lower than HDB's loan rate, it might be something that Singaporeans could benefit from. Having said that, even though we have only historical data as a gauge, there is still a small chance that fixed deposit-linked rates could surpass HDB's loan rate.

If you have cash on hand to cover the mandatory 5 per cent down payment, and the other 15 per cent stashed in your bank or CPF account, then a bank loan might be the right choice for you.

However, be aware that banks tend to be more stringent in their repayment policies. Typically, they charge a 1.5 per cent penalty for early repayment within the commitment period. Banks also charge a late payment fee of at least $50 for each late repayment.

CHOOSE WHAT WORKS BEST FOR YOUR FINANCIAL SITUATION

We highly recommend that Singaporeans get an AIP before they whip out their cheque books to lock in the purchase. The process of getting an AIP might be tedious for some, but not having it creates more problems down the line.

Without an AIP, you would be going into the purchase blind. It would be impossible to bargain over the price of a home because you would not know how much a bank is prepared to lend you. You could also risk losing your deposit, which would then be disruptive to your financial planning.

If you are risk-averse, or if there is a chance that you could pay off your loan early, go with an HDB loan. With bank loan packages, you have to take on a certain level of risk because of the fluctuating interest rates. However, if you are willing to take on such a risk, you can currently enjoy significant savings on interest as compared with an HDB loan.

There is no hard-and-fast rule in choosing a home loan - what is important is that Singaporeans must have a clear understanding of their financial situation, as well as the fine print that each type of loan entails, so they know what they are committing themselves to.

• The writer is the chief executive of MoneySmart.sg