Mr Hou told a briefing that companies will do very well if they can meet the demands of this demographic, who were born between 1981 and 1996.

Sustainable investing is an area set to benefit, he added, noting that 90 million millennials across the world stand to inherit US$30 trillion over the next few decades.

Mr Hou said: "The world is changing, and (the changes have) profound implications to the way we should be investing.

"If a public-listed company is not embracing sustainability policies, I'm afraid it will be bypassed," he added, noting that climate change is on millennials' minds.

A DBS report out on Thursday said that millennials are almost twice as likely to invest in companies or funds that target specific social or environmental outcomes.

"Sustainable investing is becomingly increasingly compelling, given the increasing awareness among them," the report added.

Analysts predict that environmental, social and governance investments will be part of core investment portfolios in the future.

Portfolios will also be increasingly rated according to the impact they have on the environment and society, they added. 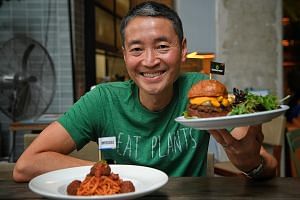 Meatless but not worthless: Fake meats a fast-growing market for eateries

Mr Hou, who was outlining the bank's outlook for the rest of the year, said the listing of Beyond Meat is a sign of how well environmentally friendly products can do.

Beyond Meat's shares have soared more than 570 per cent since its initial public offering last month, CNN reported.

The California-based company was valued at nearly US$10 billion in what has been called the most successful market debut this year.

Mr Hou added that firms can also benefit if their products impress on social media given that millennials grew up with the likes of Facebook, Instagram and Snapchat.

But they will not be the sole group to dictate investment trends, he noted, pointing out that healthcare spending will also increase as the world greys and people have longer lifespans.