BERLIN (BLOOMBERG) - The shock news of Carlos Ghosn's arrest in Japan was barely a few hours old when cracks began to appear in the automotive alliance that the globe-trotting executive had skillfully held together for almost two decades.

At a late-evening press conference in Tokyo, Nissan Motor chief executive officer Hiroto Saikawa - a former Ghosn confidant - painted a dark picture of an executive with too much power and too little oversight, which he said might have contributed to the alleged financial misconduct. But the CEO also took a swipe at the Renault-Nissan partnership, saying the Japanese market had been undervalued and that some product decisions were biased.

Over in France, where the state owns 15 per cent of Renault, officials were quick to demand continuity in a pact that observers have said has long favored the French side. President Emmanuel Macron said he would remain "extremely vigilant" regarding the stability of the Renault-Nissan alliance.

The turmoil created by Ghosn's downfall speaks to the executive's outsize role in holding together a house he almost single-handedly built. As CEO of Renault SA as well as the chairman of Nissan and new partner Mitsubishi Motors Corp, the 64-year-old was the common denominator and driving force of the partnership originally formed in 1999, when Nissan was near collapse. More than once since then, Ghosn stepped in to appease bickering shareholders, and his departure leaves no obvious person to fill that role.

"This alliance is quite heavily bound up in the personality that is Ghosn," said Demian Flowers, an analyst at Commerzbank AG in London. "If you're talking about driving integration among these companies, and even the hope of a full merger in the future, then I think those hopes just took a big step back. "

Questions about life without Ghosn weighed on shares of Renault, which ended the day in Paris down 8.4 per cent to the lowest since January 2015. The news of the arrest hit after the close of trading in Japan.

At Nissan's press conference, Saikawa sought to quell any speculation of an outright rupture, saying Ghosn's departure wouldn't impact the alliance, which he called bigger than just one person. 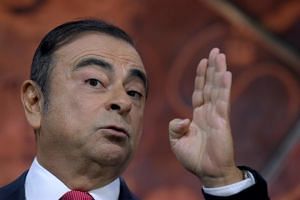 Renault says board to meet 'shortly' after Ghosn arrest in Japan

Nissan’s Ghosn does not want top job at GM

Nissan chairman Carlos Ghosn's arrest: What we know so far

"Since the investments these companies have to make in electric cars and autonomous driving are so big, and since the car industry is changing in ways we don't fully understand, it's probably suicidal to break up the alliance," said Kenneth Courtis, chairman of Starfort Investment Holdings, an investment, private equity and commodity group, and a former Asia vice chairman of Goldman Sachs Group Inc.

It's hard to underestimate Ghosn's success in forging the complicated structure. He built his reputation as a turnaround specialist by bringing Nissan back from the brink - the stuff of legend in Japan, where Nissan's demise had been something of a national tragedy. Its revival, in turn, made Ghosn a hero.

When the alliance fell into crisis after France boosted the state's stake temporarily to win a shareholder vote in 2015, Ghosn defused the situation by playing the role of chief automotive diplomat between the French and Japanese sides.

But even Ghosn - harnessing the unique cultural approach of his Lebanese-French-Brazilian heritage - never quite managed to overcome the differences between the two main sides. Even the probe into Ghosn's alleged misconduct reveals the fault lines, with the allegations against Ghosn sparked by a whistleblower investigation at Nissan. Meanwhile, Renault appears to have been kept in the dark.

Part of the lopsided power structure stems from the fact that Nissan has grown into the larger of the two by deliveries and sales, but has less say. Renault owns just over 43 per cent of Nissan, compared with the Japanese company's 15 per cent stake in the French partner. It also boasts full voting rights in the alliance, while Nissan has none.

"It is hard not to conclude that there may be a gulf opening up between Renault and Nissan," said Max Warburton, a London-based analyst with Sanford C. Bernstein.

Ghosn is the last of the larger-than-life car executives to depart. Sergio Marchionne, the architect of Fiat Chrysler Automobiles, unexpectedly died in July. Ford Motor put automotive-outsider Jim Hackett in charge last year, while Dieter Zetsche is handing over the reins at Mercedes-Benz maker Daimler after more than a decade.

A Brazilian-born French national, Ghosn was educated in Lebanon and in Paris before spending 18 years at tire maker Michelin, rising up the ranks to run its North American division. From there he moved to Renault, where he was executive vice president from 1996 to 1999. He was then assigned to turn around Nissan, where he reduced the company's purchasing costs, shut factories, eliminated 21,000 jobs and invested the savings back into 22 car and truck models in three years.

As the alliance gained in heft - together, Renault-Nissan rivals Toyota Motor and Volkswagen in size - so did Ghosn's own reputation. He was a regular on the panels of the World Economic Forum in Davos and other international conferences, discussing the future of transport and the need to rethink an industry facing massive disruption.

The upheaval comes at a pivotal time for automakers, which are preparing for the shift to self-driving, electric cars and facing upstarts from Uber Technologies Inc to Alphabet Inc.'s Waymo that are shaking the industry's decades-old pillars.

Ghosn was among the first traditional auto bosses to embrace electric vehicles, spearheading the rollout of the Nissan Leaf in 2010 when battery-powered cars were a wildly exotic sight on most roads. He predicted that small companies would have a hard time keeping up, making scale a vital recipe for survival. Salvation for the car industry lay in embracing more than just building automobiles, Ghosn said.

"You're going to see clusters of carmakers, of tech companies, software companies, align together in order to bring this offer to the market," the executive said in an interview last month.

There's no obvious choice to replace Ghosn at this point. While he moved to pass the baton - appointing Saikawa at Nissan last year and flagging Renault Chief Operating Officer Thierry Bollore as a "good candidate" to replace him at the French carmaker - there is limited management structure for the alliance.

"Ghosn always put himself in the position of appearing indispensable," said Jean-Louis Sempe from Invest Securities SA, who covers Renault from France. His departure would "bring forward the issue of the longevity and the evolution of the alliance."