NEW YORK (AFP) - US stocks on Thursday (Feb 7) suffered their biggest losses in more than two weeks as slashed European growth forecasts and warnings on the US-China trade dispute sent Wall Street into the red.

With three weeks remaining in a trade truce between Washington and Beijing, the White House said Thursday there remained a "sizeable distance" between the two sides.

US duties on US$200 billion (S$270 billion) in Chinese imports are due to rise sharply after March 1, a prospect dreaded by markets.

EU growth to tumble as trade wars take a toll 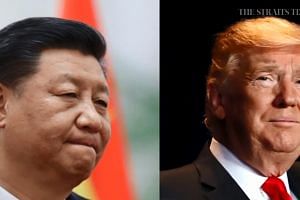 And Trump - who had announced last week he expected to seal a final deal on trade at a meeting with his Chinese counterpart Xi Jinping - said Thursday the meeting would not take place before tariffs were due to rise.

"We still have earnings season and some of the reports I saw earlier today were not all that good, for the most part they missed earnings estimates," he said.

"Some of the guidance have left a lot to be desired." Twitter plunged 9.8 per cent after quarterly results showed a shrinking global user base.

But SunTrust soared 10 per cent and BB&T rose 3.9 per cent after the midsized banks announced plans for a US$66 billion merger, creating the sixth-largest US bank.