NEW YORK (REUTERS) - US stocks fell on Tuesday (June 19) as a sharp escalation in the trade dispute between the United States and China rattled the markets, though the three major indexes pared losses from earlier in the session.

Tuesday’s losses put the Dow Jones Industrial Average back in negative territory for the year.  President Donald Trump threatened to impose a 10 per cent tariff on another US$200 billion (S$271 billion) of Chinese goods, and Beijing warned it would retaliate.

Trump said his move followed China’s decision to raise tariffs on US$50 billion in US goods, which came after the White House announced similar tariffs on Chinese goods on Friday.

“Investors are waking up to the idea that all the rhetoric on trade could be more than just a negotiating tactic,” said Emily Roland, head of capital markets research at John Hancock Investments in Boston.

“A 300-point move (on the Dow) is not what it used to be,”said Keith Lerner, chief market strategist at SunTrust Advisory Services in Atlanta. “Based on a technical perspective, the market is handling this in stride.”

The small-cap Russell 2000 index, whose components are more domestically focused than large-cap companies, was barely changed. 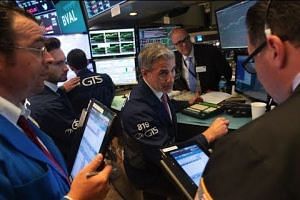 China has 'much more to lose' in trade dispute: White House

China unlikely to back down in face of new tariff threats from Trump, say analysts

China has to retaliate against US tariffs, but also needs to address concerns

Sectors seen as bond proxies due to their high dividend yields, including utilities, telecoms, consumer staples and real estate, advanced.

Shares of Boeing, which has been a proxy for trade-war tensions with China, fell 3.9 per cent, weighing the most on the Dow. Construction equipment maker Caterpillar closely followed with a 3.7 per cent drop.

The declines weighed on the S&P industrials index, which fell 2.0 per cent, its biggest one-day percentage drop in nearly two months.

Shares of chipmakers, which depend on China for a large portion of their revenue, slipped.

Tariff worries dragged FedEx Corp down 1.9 per cent. The logistics company’s shares were the biggest weight on the the Dow Transports, which fell 1.8 per cent. FedEx is scheduled to issue its quarterly report after the bell on Tuesday.

Declining issues outnumbered advancing ones on the NYSE by a 1.49-to-1 ratio; on Nasdaq, a 1.25-to-1 ratio favored decliners.