Dow member Chevron rose 2.3 per cent and Apache advanced 5.1 per cent as oil prices climbed more than 5 per cent, helped by a sharp fall in US commercial crude stockpiles.

“Investors were somewhat concerned that there was perhaps a stronger tribe for more aggressive rate hikes and it really wasn’t apparent in the minutes,” said Jack Ablin, chief investment officer at BMO Private Bank. 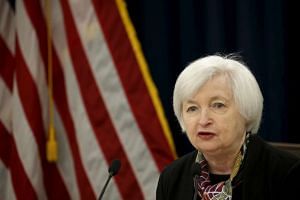 Other pharma stocks were also strong, with biotech companies gaining in part due to sentiment that they could become acquisition targets for Pfizer or Allergan. Amgen jumped 4.4 per cent, Biogen 5.3 per cent and Celgene 6 per cent.

Halliburton surged 5.9 per cent and Baker Hughes 8.8 per cent after the US Justice Department announced it was suing to block a proposed US$34.6 billion merger on antitrust grounds. The oil services companies said they would “vigorously contest” the case.