Stocks were in the red most of the session following an early morning tweetstorm from President Donald Trump accusing China of going back on commitments as trade talks resumed in Shanghai.

Trump also reiterated calls for the Fed to enact a deep interest rate cut. The central bank is expected to cut interest rates on Wednesday but investors are not sure how big the cut will be.

US consumer confidence in July rebounded strongly as survey respondents reported robust labour and business conditions and increased optimism, according to the Conference Board.

The report coincided with Commerce Department data showing a fifth consecutive monthly increase in personal income, suggesting retail spending should be healthy in the summer.

The Fed is likely to cut rates, then what? 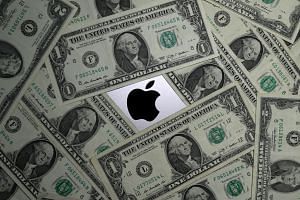 Apple gets lift from services and wearables, offsetting iPhone weakness

But analysts said the consumer data and other recent solid figures could complicate the Fed's course.

Among individual companies, Capital One sank 5.9 per cent after it disclosed that a hacker had accessed some 100 million credit card applications, one of the biggest hacks ever.

Procter & Gamble led the Dow's gainers, jumping 3.8 per cent as it reported that quarterly sales rose 3.6 per cent to US$17.1 billion, which was better than expected. The consumer products giant still reported a US$5.2 billion quarterly loss following an US$8 billion accounting hit on the lower value of the Gillette shaving business.

But Pfizer plunged 6.4 per cent as its deal announced Monday to merge its off-patent business with Mylan drew negative reviews.

A note on Pfizer from UBS said there was "not much to be excited about" in the deal, while both Morgan Stanley and Bank of America downgraded Pfizer. Mylan gained 3.1 per cent.

Beyond Meat plummeted 12.3 per cent as it reported a much bigger loss than expected. The plant-based meat company lost US$9.4 million during the second quarter, while revenues surged 287 per cent to US$67.3 million.

Apple, which is due to report results later Tuesday, shed 0.4 per cent.