NEW YORK (AFP) - Financial and technology shares were among the big gainers on Wednesday (Sept 27) as US stocks rallied on the unveiling of President Donald Trump's long-awaited tax plan.

Developed in tandem with Republican congressional leaders, the tax reform calls for slashing the US corporate rate to 20 per cent from 35 per cent, and offers tax relief to companies to bring earnings back to the United States from abroad.

The policy is expected to be significantly overhauled as it moves through Capitol Hill. 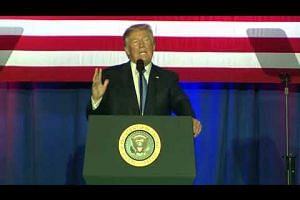 While Trump's efforts to reform the American health care system have fizzled, Wall Street's gains Wednesday suggested optimism on the prospects for the tax cuts.

Leading analysts have given the Trump tax plan about a 50 per cent chance of becoming law in some form, said Quincy Krosby, chief market strategist at Prudential Annuities.

"The question becomes, how are you going to pay for it?" Krosby said, adding that some fiscally conservative Republicans may not go along.

Stock movements suggested a shift out of consumer equities and into technology and financial stocks. Within the Dow, Goldman Sachs rose 2.1 per cent and Apple gained 0.7 per cent while Coca-Cola and Procter & Gamble each fell about 2 per cent.

Dow member Nike dropped 1.9 per cent after reporting a 24 per cent decline in first-quarter profits to US$950 million (S$1.3 billion) due in part to sluggish sales in North America.