NEW YORK (AFP) - Wall Street stocks rose after a quiet session on Tuesday (Nov 6) as investors awaited returns in US congressional elections that are seen as a referendum on President Donald Trump.

Analysts attributed the gains to continued momentum, with US stocks recovering some of the losses suffered during a bruising October.

But trading volume was light as investors refrained placing bets ahead of key election returns this evening.

Polls are showing the voting is most likely to yield a Democratic win in the House of Representatives and a Republican victory in the Senate, but the margins are very close in many states.

That outcome is not expected to undo Trump's tax cuts and efforts to roll back regulations, initiatives investors have praised. Nor would it reverse Trump's aggressive efforts to remake international trade, a source of unease for investors. 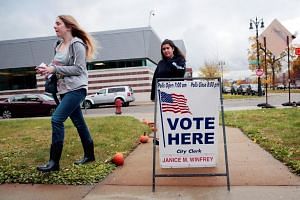 However, a Democratic victory in either house would likely lead to extensive investigation of Trump's administration, creating new roadblocks for his agenda.

Among individual companies, CVS Health surged 5.8 per cent after third-quarter earnings rose 8.2 per cent to US$1.4 billion (S$1.9 billion) due to a 6.7 per cent jump in same store sales.

Booking Holdings, which owns travel websites like Priceline and Kayak, gained 4.2 per cent after reporting a 2.7 per cent rise in third-quarter profits to US$1.8 billion.