After Tuesday, the Nasdaq was the only one of the three indices still clinging to a modest gain for the year, but stood at its lowest levels in more than seven months.

Analysts have blamed the weakness on worries about slowing global growth exacerbated by a series of Federal Reserve interest rate hikes and the burgeoning US-China trade dispute.

Some market watchers have said the fall has been exacerbated by light trading volumes this week ahead of Thursday’s Thanksgiving holidays when markets will be closed.

Most large technology companies dropped again, including Apple and Microsoft, which shed 4.8 per cent and 2.8 per cent respectively. Amazon and Netflix fell more modestly, while Google parent Alphabet and Facebook advanced modestly in apparent bargain hunting. 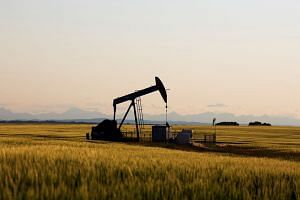 The losses came after benchmark US oil prices slid 6.6 per cent to US$53.43 per barrel, the lowest level in more than a year, amid worries over excess supply.

Leading retailers mostly fell following mixed earnings reports, with Target dropping 10.5 per cent, Lowe’s 5.7 per cent and Kohl’s 9.2 per cent. An exception was Best Buy, which advanced 2.2 per cent.