The Dow Jones Industrial Average finished up 1.4 per cent at 26,279.91, below its session high but recovering most of the losses after Monday's rout.

Stocks surged after Washington pushed back imposition of the 10 percent tariffs until December 15 for Chinese-made electronics, including items popular with holiday shoppers like cell phones, laptops and video game systems.

And news that top US and Chinese trade officials spoke by telephone early Tuesday offered further signs of a possible letup in the trade war that had been escalating in recent weeks.

"It's showing us a thaw in what has been very icy negotiations."

But Washington will proceed with tariffs on a host of other products starting Sept 1.

The stock rally was led by companies that had fallen the most after the initial tariff announcement, including toymakers, apparel companies and retailers. 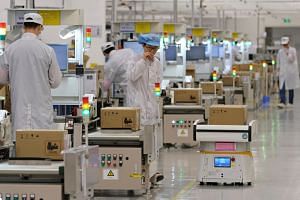 Shares of Apple surged 4.2 per cent, while electronics retailer Best Buy jumped 6.5 per cent. Nike won 2.1 per cent, Ralph Lauren 1.6 per cent and toymaker Hasbro 2.8 per cent. Toys and clothing also got a reprieve from the tariffs.

Sam Stovall of CFRA Research said the delay was positive, but the market reaction showed investors were still edgy.

"One tweet makes investors go from overly bearish to overly enthusiastic," Stovall said. "It indicates to me that this market is fragile and susceptible to any changes in news."

Trump threatened later on Tuesday to pull out of the World Trade Organisation, a signal that more trade-related volatility could be ahead.

He has made the WTO the target of many previous attacks, and threatened before to withdraw, claiming unfair treatment toward the US and saying Washington does not have to abide by WTO rulings.

Also of concern is burgeoning civil unrest in Hong Kong, where protests affected services for the second day in a row.