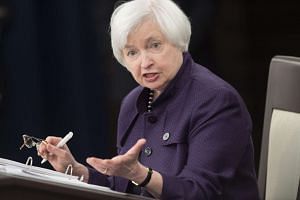 US Federal Reserve Chair Janet Yellen testified on Thursday that an increase in interest rates could occur "relatively soon," supporting market expectations that a hike will come next month.

Sinking shares in the retail giant Wal-Mart Stores weighed on the Dow's results, as the company's stock declined 3 per cent following disappointing third quarter revenues that rose 0.7 per cent but failed to meet analyst expectations.

As they prepare for the prime holiday shopping season, other major retailers also saw their prices fall: Sears lost 5 per cent while Costco dropped 0.6 per cent and organic grocer Whole Foods gave up 0.4 per cent.

"Since the election, the general tone has been there is going to be a more pro-business administration and that has created a lot of investor enthusiasm," he told AFP.