WASHINGTON (BLOOMBERG) - The White House national security adviser said Chinese cyber attacks on the United States validate the Trump administration's emphasis on offensive cyber operations of its own, after Bloomberg News reported that Beijing had hacked American computer networks using a microchip built by its spies.

Separately, two Democratic lawmakers said the report shows the risk of Chinese cyber-espionage to US companies and the government.

John Bolton, who leads the National Security Council, didn't confirm whether the White House was aware of the Chinese hack before Bloomberg's report.

"I don't want to address anything that might touch on specific intelligence questions," he told reporters.

"But I will say the Chinese efforts to threaten us in cyberspace and across the information technology spectrum are a very high priority for us - countering them, establishing structures of deterrence to prevent China from even thinking about doing it, touches on the offensive cyber operations that the president has authorised," Mr Bolton said.

Bloomberg Businessweek reported on Thursday (Oct 4) that Chinese spies exploited vulnerabilities in the US technology supply chain to infiltrate computer networks of almost 30 US companies, including Amazon, Apple, a major bank and government contractors.

Among the targets was a contractor that made software to helped funnel drone footage to the Central Intelligence Agency and communicate with the International Space Station.

Investigators found that tiny microchips, not much bigger than a grain of sand, had been inserted during manufacturing in China onto equipment made by subcontractors of Super Micro Computer, one of the world's biggest suppliers of server motherboards, the fiber-mounted clusters of chips and capacitors that act as neurons of data centres. 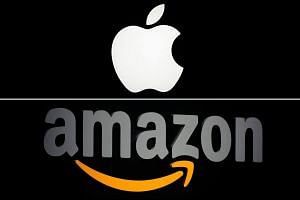 Investigators determined that the chips allowed the attackers to create a stealth doorway into any network that included the altered machines, according to people familiar with the matter.

"The report that China sought to infiltrate the computer chip supply chain, if true, is deeply disturbing and the latest example of the lengths that Beijing will go to in order to steal America's official and commercial secrets," Representative Adam Schiff of California, the top Democrat on the House Intelligence Committee, said in a statement.

He said the panel is "seeking further clarification from the Intelligence Community regarding this latest report and will be reaching out to the companies affected."

The committee's chairman, Republican Devin Nunes of California, didn't respond to a request for comment.

Senator Mark Warner of Virginia, the top Democrat on the Senate's intelligence panel and a former technology executive, also expressed concern. The report "provides more evidence that China's pattern of behavior is a serious threat to national security and supply chain risk management."

Representative Frank Pallone of New Jersey, the top Democrat on the House Energy and Commerce Committee, said the report "is deeply disturbing and Congress must investigate."

"We must hear directly from the companies potentially affected by this devastating security breach to get a better understanding of what happened," he said.

The US government has long accused China of stealing American intellectual property through cyber espionage and other means, a charge that has ramped up since President Donald Trump took office promising to take on the Chinese government.

Earlier this year, a Commerce Department investigation Mr Trump ordered into Chinese trading practices found that China had hacked into US businesses for commercial gain.

The report referenced intelligence findings that took place during the administration of former President Barack Obama, and highlighted the ongoing nature of China's hacking.

The investigation of the altered motherboards began during the Obama administration, people familiar with the matter said.

Mr Trump himself has accused China of stealing US technology, and has recently ratcheted up his rhetoric toward Beijing.

He has engaged in a trade war with the country, leveling tariffs on US$250 billion (S$345 billion) worth of Chinese imports and threatening more.

China has responded with counter-tariffs on American products with particular political resonance, including agricultural goods.

"We have a tremendous problem with theft of intellectual property with China," Mr Trump said on Monday during a news conference to announce a new trade agreement with Canada and Mexico.

The Chinese government has denied allegations of state-sponsored hacking of US companies.