SINGAPORE - United Overseas Bank said on Friday (Nov 3) that net earnings for the third quarter rose 12 per cent over the same period a year ago to S$883 million, largely due to stronger net interest income and fee and commission income.

The increase was partly offset by lower trading income and higher operating expenses and allowances.

Non-interest income increased 2 per cent to S$830 million. Fee and commission income grew 12 per cent to S$551 million from wealth management, fund management and credit card businesses. This was partly offset by lower net trading income. Total expenses rose 6 per cent from a year ago to S$973 million mainly due to higher staff and IT-related expenses.

As at Sept 30, 2017, the amount of non-performing loans (NPL) grew 7 per cent year-on-year and 8 per cent from the previous quarter to S$3.75 billion. This was mainly driven by a large account in the oil and gas sector, which remained under stress.

Deposits were 7 per cent higher year-on-year at S$268 billion while gross loans increased 8 per cent to S$234 billion. Loan-to-deposit ratio stayed healthy at 85.8 per cent.

UOB chief executive Wee Ee Cheong said this was the bank's "strongest quarter yet", driven by a pick-up in the global economy and higher revenues from its diversified banking franchise. 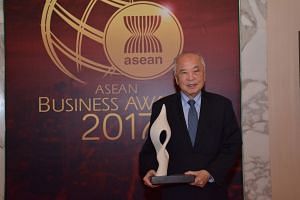 Wee Cho Yaw to retire from UOB board

"The asset quality of our overall portfolio was stable, apart from a couple of oil and gas-related issues, and our reserves buffer and capitalisation remained high.

"Our recent debut of perpetual capital securities in the US dollar market was well received by investors, reflecting their confidence in the Group's strong financial standing."

Despite ongoing uncertainties in the external environment, Mr Wee said UOB believes in Asia's long-term prospects, which are backed by its favourable growth drivers. "We continue to invest in capabilities to support our customers' regionalisation ambitions and rising wealth needs."