Japan's taxi market can become more efficient, even though its services are already of a high quality, he said at an event with former US ambassador to Japan John Roos. While Khosrowshahi didn't announce any specific deals, he made clear that Uber would make a renewed push to expand in Japan.

It's the clearest sign yet the ride-hailing giant will redouble efforts to take a piece of Japan's US$16 billion taxi market. Amid heavy operating losses in the US and a retreat from international markets - Uber has ceded China, Russia and is said to be considering a sale of its Southeast Asian business - Japan has the potential to offer a rare bright spot for a company headed for a public listing next year.

"It's clear to me that we need to come in with partnership in mind, and in particular a partnership with the taxi industry here, which actually has a very, very strong product," said Khosrowshahi, who is making his first trip to Asia as Uber's CEO. "But that product hasn't kept up with technological change."

While Uber has clashed with taxi rivals and regulators around the world, it has played by the rules in the archipelago, relegating its business to car hires and a ride-sharing program for the elderly in a small rural town. The company's main success in Japan has been food-delivery service Uber Eats, which Khosrowshahi said made him realize the country's potential.

"I saw Japan as an incredible opportunity, and when I asked the team why wasn't our Japan business larger, I started learning the history of our approach to Japan, and it was an approach that frankly didn't work," Khosrowshahi said. He was speaking with Roos, a co-founding partner at Geodesic Capital, an Uber investor. 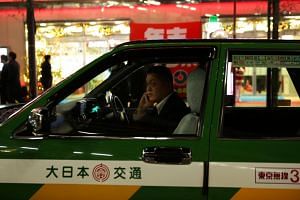 And on Tuesday, just an hour before Khosrowshahi spoke, Sony Corp unveiled an alliance with six taxi operators in Japan, which have a combined fleet of more than 10,000 cabs in the greater Tokyo area. Sony is aiming to develop a ride-hailing app powered by artificial intelligence and also provide a payment services.

Uber's CEO said Japan's taxi utilization rate is 30 per cent, while Uber's is more than 50 percent. By combining Uber's brand, technology, along with demand from tourists and partnerships with the taxi industry, he said the result would be a "win-win" for Uber and the taxi industry.

Khosrowshahi's enthusiasm echoes comments from Uber's Asia head Brooks Entwistle, who told Bloomberg this year that Japan will be a major focus for the company in 2018. That's a turnaround from previous boss Travis Kalanick who largely left the country in the hands of a country manager. But Uber saw four listless years in Japan, achieving less than 1 per cent of monthly rides in Tokyo, the world's largest single cab market.

Asked about SoftBank, which in January became Uber's biggest investor, Khosrowshahi said the Japanese telecoms and investment company is "simply the smartest money in the transportation space."

"They have invested in many other ride-hailing and ride-sharing companies around the world, which has allowed them to be incredibly smart about what it takes to succeed," he said. "We're very early in our relationship, but we're already having very good dialogue, both about the Japanese market and the ecosystem that SoftBank has created."

Khosrowshahi said he wasn't bothered by SoftBank's announcement this month that it's partnering with Didi to target ride-hailing in Japan.