(REUTERS) - Mitsubishi Corp said on Friday (Sept 20) that a rogue trader at its Singapore-based unit had lost the company US$320 million (S$441 million) through unauthorised, wrong-way bets on crude oil derivatives.

The Chinese national at its Petro-Diamond Singapore unit, whom the company declined to name, was fired and reported to the police.

While Mitsubishi says it is the first such loss by Japan's biggest trading house by revenue, it is dwarfed by trading scandals at other firms over the past 25 years:

• Dec 1995: Nick Leeson, the original rogue trader, was sentenced to 6½ years in Singapore's Changi Prison after his stock futures trades in the city-state sank Barings Bank. His losses at the British institution amounted to US$1.4 billion. He was released in 1999.

• March 1996: Yasuo Hamanaka, a former Sumitomo Corp trader, was sentenced to eight years for forgery and fraud for amassing US$2.6 billion in trading losses. Hamanaka was nicknamed Mr 5 Per cent for the share of the world's copper he reputedly controlled.

• Feb 2002: Allied Irish Bank said rogue trader John Rusnak had defrauded its US subsidiary Allfirst of US$691 million. Rusnak was sentenced to 7½ years in prison after he admitted devising a scheme that netted him US$850,000 in salary and bonuses from 1997 to 2001.

• March 2006: Chen Jiulin, the former chief executive of jet fuel trader China Aviation Oil (CAO), was jailed for four years and three months for his role in concealing US$550 million in trading losses from betting the wrong way on oil prices. The losses brought Singapore-listed CAO to the brink of collapse. 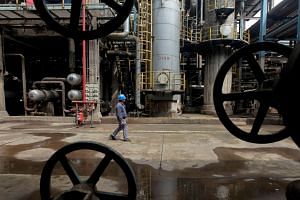 • Feb 2009: Alexis Stenfors, former senior trader at Merrill Lynch in London, was banned for at least five years for deliberately overvaluing his trading positions to hide his losses, forcing the US bank to make a US$456 million writedown.

• Oct 2010: Former Societe Generale trader Jerome Kerviel was sentenced to three years in prison by a Paris court for unauthorised trading and ordered to reimburse the French bank 4.9 billion euros (S$7.4 billion). He was found guilty of breach of trust, computer abuse and forgery.

• Nov 2012: Former UBS trader Kweku Adoboli was convicted and sentenced to seven years in jail for the biggest fraud in British history. He was acquitted of four counts of false accounting. His risk exposure had peaked at US$12 billion, while his desk's authorised limit was US$100 million intra-day and US$50 million overnight.