BANGKOK (BLOOMBERG) - Thailand's benchmark stock index fell less than most regional peers on Monday (March 25), while the baht strengthened as investors assess the outlook for the nation's markets after a pro-military party took the lead in the first general election since a coup in 2014.

The Palang Pracharath party is now poised to bring junta leader Prayuth Chan-Ocha back as prime minister even as anti-junta parties led by Pheu Thai are also set for substantial lower-house seats. The outcome will prompt a review of exposure to Thai assets as foreign investors have withdrawn in excess of a net US$700 million (S$947.2 million) from its stock and bond markets this year.

Thailand's SET Index lost 1.3 per cent as of 3:05pm in Bangkok, less than declines in the broader Asian benchmark amid a global sell-off triggered by economic growth concerns. The measure extended drops as trading resumed after the lunch break. The baht, Asia's best performing currency this year, strengthened 0.4 per cent to 38.566 against the US dollar, while the 10-year sovereign bond fell 2 basis points to 2.41 per cent.

"We believe local investors will likely take cheer at prospects of continuity and deliver a bounce lasting possibly several weeks," Credit Suisse Group analysts including Dan Fineman wrote in a note. "We note, however, that the next government will be a weak and possibly unstable coalition and that the market is fairly expensive."

Thailand's SET Index has gained an average 6.6 per cent in the month after four major polls dating back to 2001, according to data compiled by Bloomberg. The gauge has climbed about 4.5 per cent this year, trailing a 7.8 per cent advance in the MSCI Asia Pacific Index.

"Some investors are probably concerned about the stability of the new government," said Win Phromphaet, the Bangkok-based chief investment officer of CIMB-Principal Asset Management Co. "PM Prayuth will extend his reign, but will face very strong opposition parties."

"We will watch how alliances settle over the next 72 hours to get a better gauge of political control in the lower house," Morgan Stanley analysts including Sean Gardiner wrote in a note dated March 24. "This will be key for foreigners to return after their net sales of ~$7 billion of Thai equities over the last 12 months." 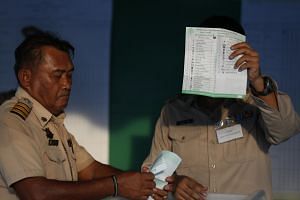 So far this year, international investors have withdrawn a net US$349 million from equities after a record selloff of US$8.9 billion in 2018.

"Investors will probably buy back the baht as the major event risk is over for Thailand and also as the results are not far from what was expected," said Hironori Sannami, an emerging-market currency trader at Mizuho Bank in Tokyo. "Thailand is considered to be one of those countries where the politics don't have much impact on its economic state."