Tesla Motors fell 4.8 per cent after Bloomberg News reported that US Securities and Exchange Commission (SEC) enforcement attorneys in San Francisco were probing the electric car maker after chief executive Elon Musk said on Twitter on Tuesday he was considering taking the company private.

The SEC, which had already been gathering information on Tesla's public pronouncements, added questioning of whether Musk's claim that he had secured funding for a takeover to the inquiry was meant to be factual, Bloomberg said, citing people familiar with the matter.

Analysts described broader market activity as low-key following US inflation data that was seen as benign in terms of allowing the Federal Reserve to maintain a gradual pace of interest rate hikes.

"It's been a very quiet day," said Quincy Krosby, chief market strategist at Prudential Financial. "Earnings have been very strong and the guidance has been positive but it's not new." 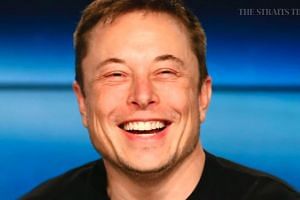 Drugstore chain Rite Aid dived 11.8 per cent after announcing it had called off a merger with Albertsons.

Booking Holdings slumped 5 per cent on disappointment over the company's third-quarter forecast.