Deputy Prime Minister Heng Swee Keat has said that Singapore is well positioned to meet the global demand for semiconductors - a key driver of the country's growth - after a multibillion-dollar investment here even though the industry is facing challenging times.

Mr Heng, who is also Finance Minister, said yesterday at the official opening of Micron Technology's new and expanded semiconductor plant in Woodlands: "No doubt the semiconductor industry is experiencing headwinds this year, (with) a sharper-than-expected downswing. This is due to global economic uncertainties and weaker demand...

"But these headwinds should be viewed in the context of the 'semi-conductor super cycle'. In the preceding few years, global demand grew by more than 35 per cent."

He said recent forecasts suggest that global demand could return to modest growth next year, and expand at between 2 per cent and 9 per cent annually in the following years.

His comments come after the latest data showed a 14.6 per cent plunge in Singapore's exports in the second quarter, with electronics exports contracting 26.9 per cent.

But Mr Heng noted: "Beyond smartphones and tablets, the consumer demand for other smart devices ranging from TVs to wearables is growing. We are also seeing the rapid advancement and deployment of new, innovative technologies... (These) will boost demand for semiconductor components."

He cited Micron, whose major investment will not just ramp up its capacity to produce new flash memory structures, but also see it raise its staff strength as the new facility goes online.

Mr Heng also pointed out that these are high-skilled jobs.

INVEST FOR THE LONGER TERM

We will need to continue to strengthen our semiconductor ecosystem. This includes closer collaboration between manufacturers and their suppliers. We must continue to invest for the longer term... This way, we will be ready to harness new opportunities when the global demand picks up.

Singapore accounts for 11 per cent of the global market share for semiconductors and is home to more than 60 semiconductor companies.

The industry also contributes more than 7 per cent of gross domestic product, employing around 35,000 people with a value-add of $35.2 billion, based on preliminary estimates by the Ministry of Trade and Industry for 2018.

Mr Heng also had words of caution for the industry: "The global semiconductor industry is extremely competitive," he said. "We must continue to invest for the longer term... This way, we will be ready to harness new opportunities when the global demand picks up."

Mr Ang Wee Seng, executive director of the Singapore Semiconductor Industry Association, said the slump has been worsened by the trade tensions. 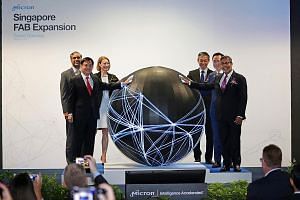 Micron plans to add 1,500 more jobs to its Singapore operations

Chipmakers look into layoffs but no major job cuts for now

"This downturn isn't like what we saw in the past because there is still very strong demand for semiconductor chips, driven by technologies such as 5G, Internet of Things and automotive," he said.

"We will see a strong recovery as soon as technologies like 5G come into play."

Ms Selena Ling, head of treasury research and strategy at OCBC Bank, said that apart from the cyclical downturn for electronics, there is also fresh uncertainty.

"There is also an element of structural uncertainty in that the global trade environment has changed, possibly permanently under the Trump administration's advocacy of an 'America first' philosophy. So, the 5G and Huawei issues are still unresolved and could, in a worst-case scenario, lead to a splintering of different 5G systems," she added.

She said the question of how to stay competitive comes back to basic fundamentals that Mr Heng mentioned, by having a skilled and nimble workforce, good logistics and strong ecosystem with the supporting research and development.

Mr Ang added: "Companies will take this opportunity to drive productivity too, so when the times are better, they can do things faster, better and cheaper."