Taking risks in business is key, but there are some "bright lines" that those working at Keppel Corporation should not cross, chief executive Loh Chin Hua told an earnings briefing yesterday.

Mr Loh was responding to questions relating to the bribery scandal that has engulfed Keppel's rig-building unit, which dominated the question-and-answer session at the briefing.

News broke last month of Keppel Offshore & Marine's US$422 million (S$552 million) in fines as part of a global settlement reached by the criminal authorities in the United States, Brazil and Singapore over corrupt payments made by a former Keppel agent in Brazil.

Mr Loh said: "It's very clear - Keppel has a set of core values, and integrity is very much in the centre of it. These core values do not allow us to act unethically or illegally. We do want to encourage all our Keppelites to continue to take legitimate business risks, for which we hope we will get suitable returns.

"But there are some bright lines that we should not cross."

Keppel has taken a steep charge totalling $619 million in its fourth quarter for the one-off financial penalty and related legal, accounting and forensic costs in relation to the global resolution. 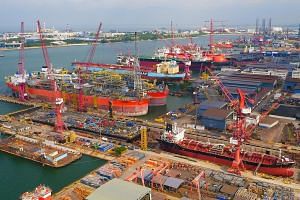 Keppel Corp shoved into the red by $619m graft penalty

He added that Keppel has since put in place enhanced compliance controls, including comprehensive training and certification, to prevent any repeat of such misdeeds. These include an enhanced code of conduct that has detailed anti-corruption protocols, experienced compliance personnel and a new whistle-blower policy.

"This is really about drawing a line and looking forward," Mr Loh said.

"It is very clear to us that we have the capabilities and the solutions that will allow us to win business legitimately, within the laws, within the rules, and also ethically, and that is something that we will pursue.

He added that the group will continue to operate in Brazil, which remains an important market.