The Singapore Exchange (SGX) has entered into exclusive talks to acquire the Baltic Exchange, giving it the inside track on acquiring the London-based firm.

The Baltic Exchange is a vital cog in the global shipping industry.

Its London headquarters and Singapore offices compile extensive market data, such as daily indices tracking the dry bulk and tanker shipping sectors, used by its member firms as benchmarks for settling shipping contracts and derivatives.

The exclusive talks, which end on June 30, mean the two parties are engaging only each other to discuss a transaction and the agreement marks a step forward by the SGX after it revealed its bid to acquire the Baltic Exchange in February. 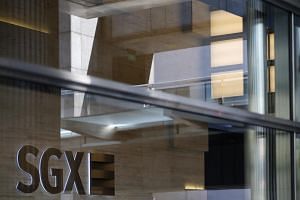 There is no guarantee the talks will result in a deal but they do put the SGX in pole position.

Acquiring the exchange would be a boost for the bourse, given Singapore's strength as a shipping centre. "The proposed transaction would bring together complementary strengths of Singapore and London, two of the world's most important maritime hubs," the SGX said.

"The SGX has been successful in driving the growth of the global dry bulks and freight market and is now a significant provider of clearing and settlement of freight derivatives.

"Both the SGX and the Baltic Exchange would also benefit from new growth opportunities, including potential new shipping benchmarks and clearing solutions that meet the market's evolving needs for data and trading."

Mr Jason Chiang, director of Ocean Shipping Consultants, called the Baltic Exchange a "barometer" of the shipping industry. "A large number of arms-length tanker or dry bulk charter contracts will take reference from the Baltic Exchange. In some cases, the exchange's index is used to adjust charter rates in the case of volatility," he added.

No information was provided on the price of the potential acquisition, but market talk puts it at around US$100 million (S$138 million). The SGX has proposed several sweeteners, including a pledge to keep fees at both the SGX and the Baltic Exchange at current levels for at least five years. The deal would be the SGX's first high-profile acquisition in recent years.

The bourse has not found much success in expanding via asset acquisition. In 2011, its US$8.8 billion offer to buy out the Australian Securities Exchange for a merger was rejected by regulators Down Under.

Other attempts to broaden its regional reach have yielded results, with the SGX inking a partnership with the Taiwan Stock Exchange in January. But the big prize - a rumoured stock-connect partnership with Shanghai - remains elusive.

These recent initiatives come against a challenging market backdrop where the SGX is finding it difficult to grow the securities business.

But chief executive Loh Boon Chye has repeatedly stressed a multi-asset growth strategy for the company, which launched the MSCI China Free Index earlier this month in a bid to improve the SGX's product and service mix. New indices and solutions stemmed from the Baltic Exchange acquisition will further shapen SGX's edge.

SGX shares closed up nine cents or 1.19 per cent at $7.67 yesterday ahead of the announcement.

A version of this article appeared in the print edition of The Straits Times on May 26, 2016, with the headline 'SGX in exclusive talks to buy Baltic Exchange'. Subscribe
Topics:
More
Whatsapp Linkedin FB Messenger Telegram Reddit WeChat Pinterest Print Purchase Article Copy permalink