SINGAPORE - Bus and rail operator SBS Transit posted a 43.2 per cent surge in third-quarter profits to $7.82 million on the back of higher ridership and lower fuel, depreciation and finance costs.

For the nine months to Sept 30, the company, a subsidiary of transport giant ComfortDelGro Corp, reported a 41.9 per cent rise in net earnings to $23.15 million. 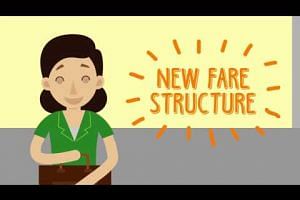 Bus and train fares reduced by overall 4.2 per cent; fare structure to be further simplified

Buses posted a 35.1 per cent rise in operating profit to $9.2 million, with lower diesel cost contributing to its margin of 4.5 per cent (up from 3.3 per cent previously).

Rail posted a 21.2 per cent drop in operating profit to $778,000 even as revenue grew. Higher staff and other costs associated with the ramp-up for Downtown Line 3, which is opening next year, eroded profitability. Operating margin for this segment shrank from 1.8 per cent last year to 1.1 per cent.

SBS Transit said average ridership for the Downtown Line grew by nearly 200 per cent in the third quarter to 234,000 trips a day.

Directors expect rail ridership to continue to grow. However, fare revenue will be affected by the recently announced 4.2 per cent fare reduction, which kicks in on Dec 30. Its bus business commenced operations under the Bus Contracting Model with effect from Sept 1. Directors expect revenue "to be maintained".

With salary adjustments announced in June, staff costs are expected to be higher, it added.

Analysts expect SBS Transit's rail business to be hit harder by the 4.2 per cent fare cut vis-a-vis rival SMRT, which has since migrated to a new financing framework which partially shields it from sharp fluctuations in margins.

SBS Transit shares rose six cents or 2.8 per cent to $2.21 before the results were announced.