The centre will ensure swift baggage handling, security check and immigration clearance, to allow a "seamless passage" through the airport for the passengers, Sats added.

SSAS has handled more than 4,000 flight movements since its first flight at Seletar Airport on Nov 19, 2018. Of these, close to 70 per cent are attributed to business aviation, Sats said.

Sats also noted that the number of flights for business aviation is expected to grow 3-5 per cent year on year.

Bob Chi, chairman of SSAS, said that private-jet travellers are usually on a tight schedule and travel frequently, thus saving time while travelling is important to them. 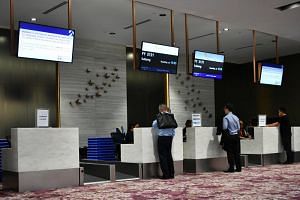 Firefly lands in Seletar Airport, new GPS procedures could be rolled out at Seletar in 6-12 months

"Sats hopes to support Changi Airport in their plan to grow Seletar Airport into a hub for business travellers and tourists travelling on private jets," he said.

Since April 21 this year, Sats has also been handling flights by Malaysian airline Firefly from Seletar Airport.

The company is the chief ground-handling and in-flight catering firm at Singapore Changi Airport.

Sats shares on the Singapore Exchange mainboard were trading up five Singapore cents at $5.02 as at 3.17pm on Tuesday.