LONDON (BLOOMBERG) - Rupert Murdoch is officially walking away from Sky, the satellite broadcaster he helped build over three decades, marking the end of an era for both the billionaire and British media.

21st Century Fox, which Murdoch controls, agreed to sell its 39 per cent stake in Sky to Comcast after an intense bidding war that lasted months.

Comcast was already poised to acquire the other 61 per cent of the company, but it wasn't clear until Wednesday (Sept 26) that Murdoch would capitulate and sell the remainder as well.

The move lets Fox focus on another megadeal under way: The majority of the company will be sold to Walt Disney in a US$71 billion (S$96 billion) transaction that's slated to close next year.

Disney supported the decision to sell Fox's Sky stake, which is worth more than US$15 billion. The move will help Disney reduce the amount of debt it has to take on in acquiring Fox.

Fox will get £17.28 a share for Sky, the amount of Comcast's winning bid submitted at an auction on Sept 22.

"In light of the premium Comcast has agreed to pay for Sky, we and Disney have decided to sell 21CF's existing 39 per cent holding to Comcast," Fox said. "We congratulate Comcast on their pending acquisition." 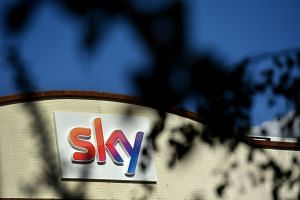 Comcast outbids Fox with £30b offer for Sky in auction

Netflix Threat Comcast, the largest US cable provider, is now on track to take full control of the British pay-TV company - and its 23 million subscribers in five European countries. The new global scale is meant to help it fend off fast-growing streaming rival Netflix.

Sky shareholders have until Oct 11 to tender their shares.

Between selling the Sky stake and a separate plan to unload Fox's regional sports networks, Disney is expected to cut about US$30 billion from its acquisition costs.

Comcast's Sky bid ended Murdoch's second effort to take full control of the satellite television company he started in 1989. The first was scuttled by a phone-hacking scandal at his British newspapers, and it took him half a decade to try again.

When he did in December 2016, Fox was the only apparent suitor. But then Comcast entered the fray in February this year, sending shares of Sky soaring. Fox's Sky stake is now worth more than double what it was before Murdoch's latest takeover effort.

Sky got its start when Murdoch set up Sky Television, initially a four-channel offering that included sports and movies delivered via satellite. In a speech in Edinburgh that year, Murdoch took on the British television industry, describing the output of the incumbents as a "parading of the prejudices and interests of the like-minded people" who made up Britain's elite.

It was a risky venture that generated heavy losses in its first year and was forced to merge with rival British Satellite Broadcasting in 1990, taking the name BSkyB. It listed in 1994, with Murdoch's company - then News Corp - reducing its stake to 39 per cent.