SINGAPORE - Integrated healthcare provider Raffles Medical Group on Monday morning(July 29) posted a 15.6 per cent fall in net profit to $14.2 million for its second quarter ended June 30, down from $16.9 million in the year-ago period, due to start-up costs at its Chongqing hospital.

Revenue for the quarter grew 5.6 per cent from a year ago to $127 million, amid an increase in contributions from the healthcare services and hospital services division by 7.4 per cent and 3.4 per cent respectively.

The board has declared a dividend of 0.5 cent per share for the quarter, the same as last year.

Gestation losses at Raffles Hospital Chongqing - around $2.3 million at the earnings before interest, taxes, depreciation and amortisation (Ebitda) level - contributed to the drop in Q2 net profit.

The group said on Monday that the Chongqing hospital was developed "well within the budgeted costs", and its operating costs for the first six months were "significantly lower" than expected.

Raffles Hospital Chongqing's management is making "great efforts" to reach out to corporate and private patients of Chongqing, the group added. Since it opened on Jan 2, 2019, the hospital is now operating 24/7.

Previously, the group's first-quarter net profit had also fallen due to start-up costs at the hospital. Net profit for the three months to March 31 slipped 13.7 per cent to $13.6 million. 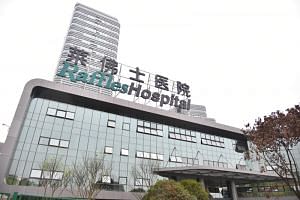 Excluding the Chongqing hospital's results, net profit after tax for Q2 would have increased by 0.4 per cent instead of the 15.6 per cent drop, said the company.

The group said it is expected to remain profitable in 2019 despite the gestation losses for Raffles Hospital Chongqing.